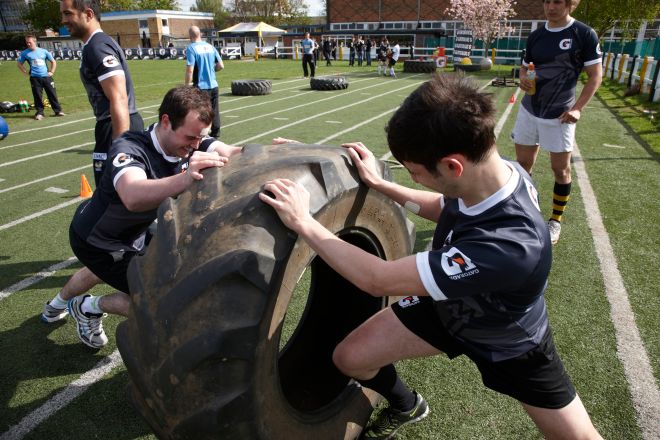 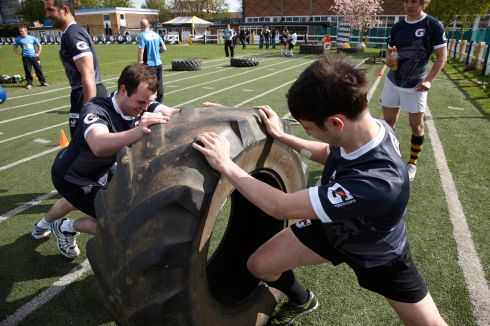 Here at Sport Locker, we like to get our hands dirty.

So when AVIVA Premiership side London Wasps invited us to take part in a training session, we were there quicker than a Gavin Henson quickstep!

It was left to Sam Van Gelder to take a break from his day job and take one for the team – and he chucked himself head first into the unknown!

Media were invited to take part in a professional rugby coaching session alongside three Wasps players – Riki Flutey, Sam Northcote-Green and Andy Powell (who’s since moved to Sale (and no, I didn’t pick a fight with him. It would have been embarrassing. For him.) 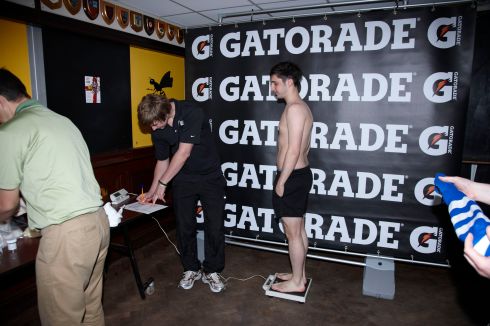 During the training session, we were asked to take part in a hydration sweat test hosted by Gatorade Sports Science Institute (GSSI) scientist, Dr Stavros Kavouras, which would show how much sweat we lost during exercise, and also explain the scientific research behind drink and what exact benefits it has for your body during training (as well as much more scientific info which you will read about later).

Now let’s make things clear right from the outset. I’m not a rugby player. Well, I did play a couple of times at school but getting battered and bruised just isn’t something that appeals to me.

Nevertheless, always game for a challenge, I was thoroughly looking forward to finding out just what a Rugby training session involved, and if there were any similarities with its football counterpart.

So I arrived at the training ground full of energy and raring to go. We were promptly told to get ready and don our Gatorade branded Rugby tops and shorts (which was not a good look by the way – never have I felt more scrawny!)

It was then time for the scientific tests to start.

We were all weighed, asked to provide a urine sample (to see how hydrated we were), had sweat patches stuck to our arms and foreheads and then had heart-rate monitors attached – I was feeling very much part of a scientific experiment.

We were each given a separate bottle of water and Gatorade with our specific numbers on and these were measured to see how much fluid we took on board during the session.

And so the hard work began!

After a brief loosening up and stretching routine, we were put through our paces in a bit of circuit training. That said, it felt like a mini World Strongest Man competition!

The drills at the individual stations included pushing weights on the ground, lifting weights and racing with them, tyre lifting and pushing, tug-of-war, medicine ball wrestling and tackling bags.

And if the photos don’t do it justice – let me make it abundantly clear that it was bloody hard work!

It was quite interesting to notice that anything involving my legs, I seemed to cope with very well, but any time I had to use my upper body I was utterly pathetic. I mean Heurelho Gomes pathetic! So it was interesting to see how some skills were transferrable from football.

Take in some fluids…

At this point, I was absolutely gasping for a drink. So we all took a well earned break and had a few sips of Gatorade and H20 (as the cool kids call it).

And after some chat about the benefits of Gatorade in terms of what goodness it puts back in your body which is lost during exercise, it was time to get to work once more.

At this point, I would have been happy for the session to be over, but it had barely started – oh joy!

However, my ticker was given a brief rest when the ball was introduced, and the skills session began.

It was forward work to begin with, and we had to show quick feet in running through ladders before passing the ball through a net. 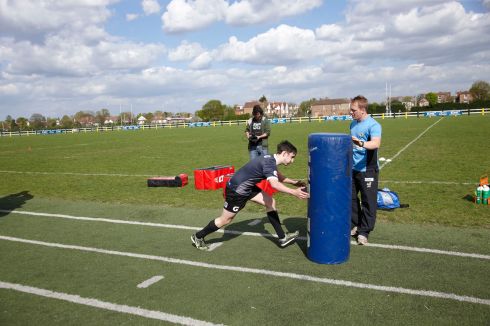 I enjoyed this not only for the fact that it meant I wasn’t completely knackered, but it also gave me an insight into the creative side of being a rugby player.

But little did I know, around the corner, things were about to get a whole lot harder!

Time for the really hard work –  the back skills!

Well, we had to do that, but instead run into bags held by rugby players that weigh two tonnes. That’s their scientific weight. At least it felt like that.

Every time I ran into a bag, it felt as if my whole body was caving in; shoulders cracking, back splitting – I was reduced to walking like an elderly cripple. Pathetic! Like Heurelho Gomes pathetic (he deserves it). 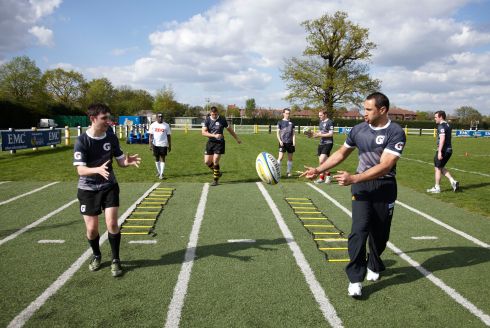 How the pros run into each other without the use of padded bags, I’ll never know. But hats off to them, I say.

Nutters, the lot of them.

After another tackling drill, more fluids were consumed and I was prepared for shower time.

But to my horror, I had more work to get through first – core fitness!

My heart had never worked so hard. My lungs never wanted oxygen so much. My legs never longed to be chilled on a sofa so much – this was certainly the hardest session my body had ever been put through.

And then, finally, the most grueling session in history (fact) was over!

Our sweat patches were peeled off and put in separate bags along with another urine sample, heart monitors taken back, and we were all weighed again before we were free to get back to normality again.

I then had the chance to talk Twitter, the World Cup and Rugby with Riki Flutey (click on his name to read the full interview) and then my brief spell as a rugby player was over.

The Results are in!

A few weeks later, and just as I was regaining feeling in my limbs, I received the all important results – and my urine came back clear. Phew! 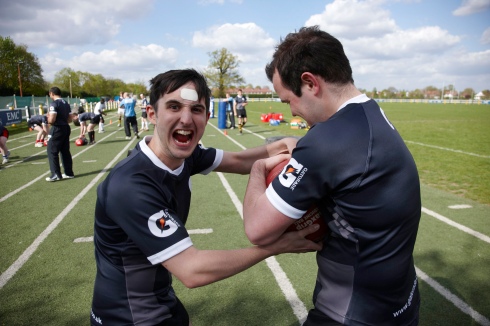 But in all honesty, I was really interested to see how taking on fluids affected my hydration and sweat levels, and also just how much sweating did take place.

In a nutshell, the report covered:

Well, that is in very basic terms. In fact, the report also covered Urine Specific Gravidity (USG) and weight change during training.

And here are the main observations and recommendations (scientifically put, of course):

And Stavros was keen to highlight:

“The electrolyte levels lost during exercise which shows you lost 41 mEq/L of Sodium and 7 mEq/L of Potassium in your sweat. Although your sweat rate is within the normal range, losing these essential electrolytes through sweat over an extended period of time can lead to a reduced performance level.

“This is why Gatorade should be used to replace essential mineral salts and fluids lost during exercise to keep you your performing at your best.”

So all in all, what an unbelievable experience. For a day, I felt like a pro sportsman, being tested and pushed to the limit to see how my body reacted. And it turns out, I’m pretty fit.

It’s great to see the impact that drinking Gatorade can have on performance and it definitely something I’ll now bear in mind for the future.

Anyone need a scrum-half this weekend?

Sport Locker were put through their paces with a series of rugby coaching drills and offered hydration and sweat testing by a Gatorade Sports Science Institute scientist to highlight the effects of intensive training on the body. Gatorade is the official hydration partner of the AVIVA Premiership