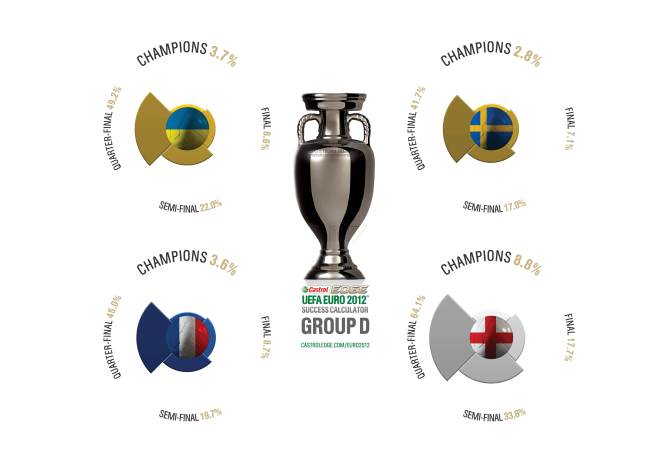 Yes that’s right Sport-locker.net readers, we can today reveal that England will DEFINITELY make it to the semi-finals of EURO 2012 this summer.

Following England’s 3-2 friendly defeat to the Netherlands last night and, the Castrol EDGE Calculator has predicted that this result will be repeated in the semi-finals of the tournament.

With exactly 100 Days to go until the big tournament, anticipation is building.

But the Netherlands will be our nemesis again, defeating usen route to a Final with Spain, a repeat of the World Cup Final.

UEFA EURO 2012™ sponsor Castrol EDGE has revealed that England is most likely to leave this summer’s competition after a Semi-Final defeat to the Netherlands. Elsewhere the Republic of Ireland will struggle to make it beyond the group stages as their fellow Group C competitors, Spain are set to be crowned European Champions once again. The insight comes from the Castrol EDGE Calculator, a tool which has mapped out the entire tournament in the lead up to kick off to show fans how far they can expect their nation to go in the tournament.

By analysing past team performances, the Castrol EDGE Calculator will help fans plan which stadiums they’ll be visiting by predicting which nations will have the strength and determination to make it through the demanding group stages, before testing their mental strength as the competition enters the knockout stages when nerve-wracking penalty shoot-outs could come into play. 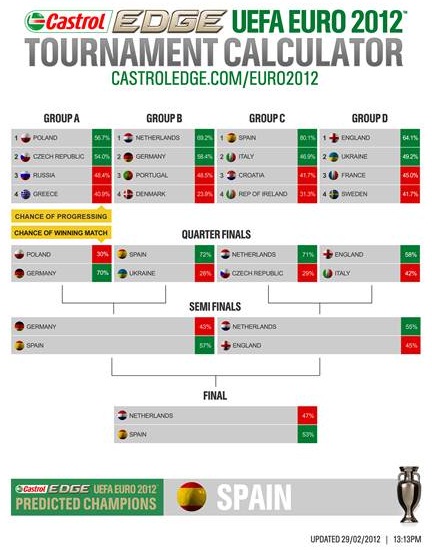 Even in the absence of a full time manager, the England team are likely to enjoy their best showing in an international tournament since 1996, according to the Castrol EDGE Calculator which uses the latest technology and data analysis techniques to look at team strength and identify which nations have the strongest chance of success at UEFA EURO 2012™.

England fans will be pleased to see that they will manage to avoid old rivals Germany after topping Group D, but the predictions for the Republic of Ireland don’t bode so well.  Irish fans are unlikely to be smiling at the prospect of not making it beyond their group. The nation has just a 31.3% chance of making it out of Group C, with reigning Champions Spain (80.1%) and Italy (46.9%) the two teams proceeding to the knock out stages.

After a strong performance in the group stage, England are most likely to top Group D (64.1%), leading them to face Group C runners up Italy in the first of the knock out stages.

Of the four Quarter-Final matches, it shows that England will need to summon up the most strength to defeat their rivals with just a 58% of making it to the Semi-Finals, compared to Spain (72%), the Netherlands (71%) and Germany (70%). Based on past performances in International competitions, the English team and their fans will be hoping that the match doesn’t go to penalties, where they notoriously crumble under pressure.

The Castrol EDGE Calculator suggests that the UEFA EURO 2012™ Final will be a repeat of the 2010 FIFA World Cup™, with Spain and the Netherlands most likely to face each other once again, and Spain is set to be crowned European Champions in a closely fought Final in Kiev.

First launched for the 2010 FIFA World Cup™ where it accurately predicted nearly 70% of teams’ progression, Castrol EDGE has applied the same expertise they apply to the development of their strongest ever oil to create the Castrol EDGE Calculator, using the latest technology and data analysis techniques to identify which nations have the strongest chance of success at UEFA EURO 2012™.

Created by the same team of Castrol EDGE Performance Analysts behind the Castrol EDGE Rankings, they calculate the attack and defence ratings of each nation. Then by simulating the tournament over 100,000 times, and taking into account the draw groupings, the Calculator can predict how successful nations will be in their groups, whether or not they’ll progress to the knock out stages, and ultimately each nation’s chance of winning the tournament.

Fans can find the Castrol EDGE Calculator at www.castroledge.com/euro2012 where it will be updated after each UEFA EURO 2012™ match so they can see the impact of every match result on their nation’s chances.