Tonight sees two giants of European football come face-to-face after being in imperious form in the 2011/12 Champions League. Both Bayern Munich and Real Madrid have a glittering set of attacking players who have been prolific this season and expectations are set for a high-scoring game.

Bayern’s progress to the semi-finals has been lit up by a number of impressive performances, including the second-leg demolition of FC Basel in the second round. Castrol EDGE Performance data shows that Mario Gomez has netted 11 times in this season’s Champions League, with an incredible shooting accuracy of 79% and chance conversion of 35%.

Gomez has been assisted by the playmaking prowess of teammate Franck Ribery, who has five assists to his name and two goals of his own, as well as an impressive 81% pass completion in final third and 62 attempted dribbles. The wide play of the rejuvenated Arjen Robben, who has crossed the ball 26 times, also remains crucial.

For Madrid, Brazilian midfielder Kaka tops the Champions League standings this season for minutes per assist, providing one every 79 minutes. Two other Madrid players, Marcelo and Benzema, also feature in the top five, serving a warning to Bayern that they will have to defend as well as they attack on Tuesday night.

Cristiano Ronaldo’s stats are predictably impressive, with eight goals, two assists and a pass completion rate of 80%. Perhaps the biggest surprise is that despite playing less than Gomez, Ronaldo and Ribery, Karim Benzema leads the way in terms of assists (five- joint with Ribery) and is Real Madrid’s most frequent scorer (one goal every 81 minutes). He sits second, behind Lionel Messi, in terms of Goal Involvement (seven goals + five assists) in this season’s tournament. 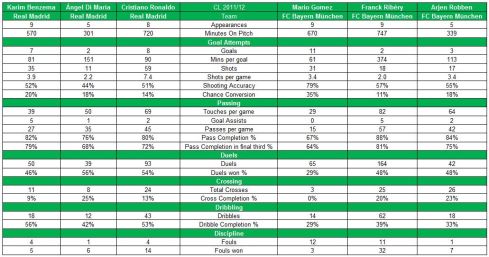 Who’s going to win today then? Don’t forget to join in the conversation on our Twitter and Facebook pages.