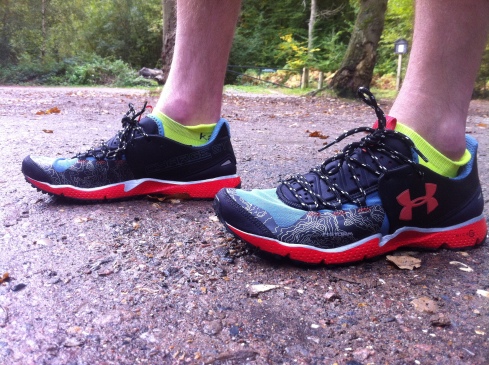 With the clouds darkening and a winter chill in the air, the thought of that off road run might not appeal as much as it did in the summer sunshine.

But, as our Norwegian friends say: “there’s no such thing as bad weather. Only bad clothes.”

Under Armour must have had that mantra in mind when they dreamt up the brilliant Charge RC Storm running shoes and planted a pair on the doorstep of Sport-Locker.net towers.

Promising to fight rain, pain, heat and fatigue with seven game changing innovations, these very much appeared just the ticket as Sport-Locker.net gears up for the Men’s Health challenge in November with a road/forest test.

These are like no running shoes I’ve ever owned and my initial impression is skepticism as to how they will meet their far reaching promises of protection from the elements and the terrain.

What is obvious upon first glance and feel is that they have been stripped to their essential parts with each component present and loaded with technology to serve a very specific function.

They feel very light, flexible and are easy on the eye. 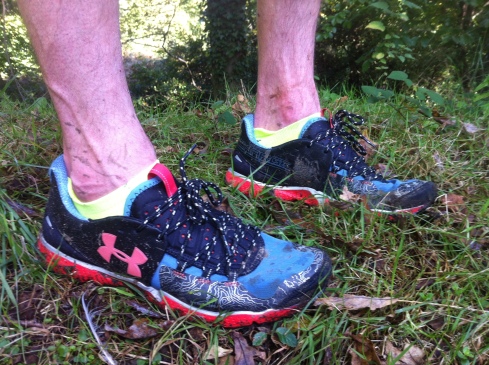 The phrase ‘sock like feel’ has never been more appropriate when describing these running shoes. Under Armour’s compression fabric is almost sponge like and certainly delivers on the promise of being ‘ultra secure’. The feeling is comparable of slipping into a sleeping bag and zipping all the way to the chin. That may sound a little too cosy but the material is super soft and the two piece upper is super flexible allowing the fore foot to flex freely and naturally.

Under Armour are arguably best known for their baselayer range seen at most professional football stadiums each weekend. 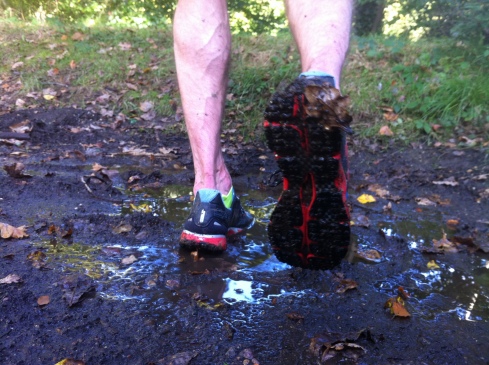 And the Heat Gear technology that has proved so successful and so popular, translates to footwear apparently, ‘wicking’ away sweat for a dryer and cooler ride. This proved to be particularly useful during this road test with a wrong turn through the forest making for a much longer and testing workout!

Also deserving of a tip of the cap for services to comfort is what Under Armour have labelled ‘4D Foam’ applied (successfully) to the collar in order to prevent slippage and those oh so irritating new running shoe blisters.

When it comes to performance, there are three specific areas for review all supplemented by innovative technology features.

The first is the promise by Under Armour to ‘fight rain’. Admittedly it wasn’t raining on the day of the test but it was soggy underfoot throughout allowing me to really test the technology out. 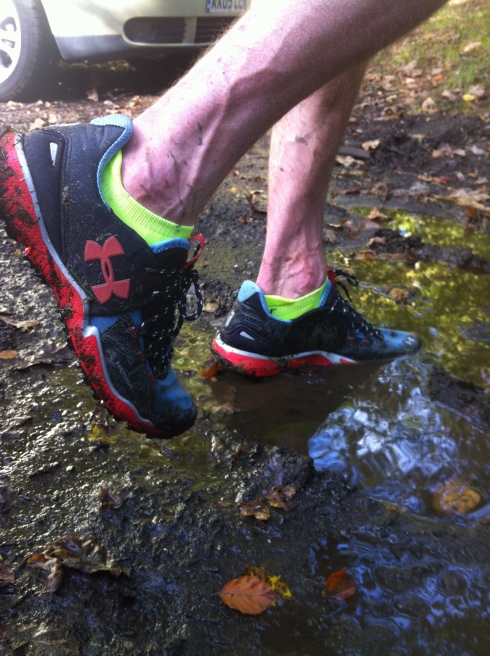 Like a toddler with a new pair of wellingtons, every puddle was an invitation to splash away (see imagery) and to my surprise the Storm technology had come up trumps. When the time came to unbuckle and remove the footwear, what lay in waiting was a completely dry sock. Not a drop. Impressed.

As a regular cyclist, I was intrigued by the ‘Mountain bike inspired tread’, and when it came to carrying out a play test it was only correct and proper to hit the forest trails.

In soggy conditions, at no point was slipping an issue making them suitable for off road running without being too rugged or clumpy to make road running uncomfortable.

Crucial to that last statement in my considered opinion is the third and final performance feature under scrutiny, the sole plate.

The full length ‘Micro G Foam’ does offer ample cushioning, particularly for a self confessed heel striker like myself.

While the effect of carbon rubber heel pods may not be ‘explosive’ as billed, like some kind of jet propelled device last seen in the cult film ‘The Goonies’, it does offer great support with each roll of the foot from heel to forefoot. 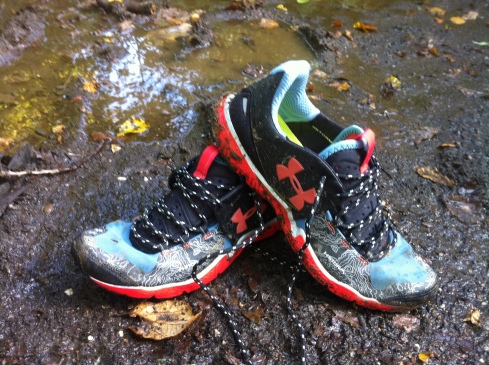 So often technology in apparel can materialise in gimmick form only. But that is certainly not the case with the Under Armour Charge RC Storm. Not only is each feature visible to the eye, or there to be touched, each feature is, crucially, effective.

A perfect ally in the fight against rain, pain, heat and fatigue.

What do you think of the Under Armour Charge RC Storm? Do you own a pair and agree with us? Let us know via the comments section below or on our Twitter and Facebook pages.