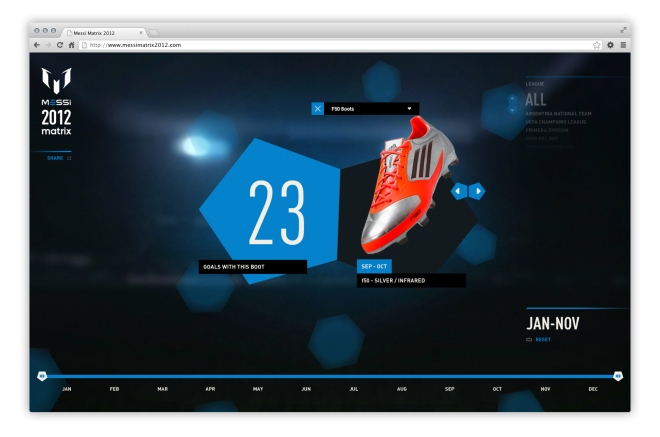 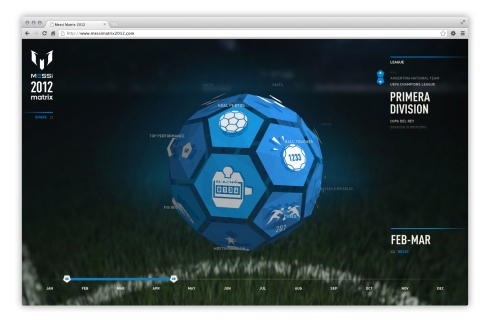 For obvious reasons, Sport-locker.net are dedicating our digital columns to a football legend today: Lionel Messi.

To celebrate Messi’s record breaking 2012, adidas has launched the ‘Messi Matrix’ – a web app that enables fans to celebrate and explore the record-breaking year of the world’s greatest footballer in a fast and fun way.

At www.messimatrix2012.com fans can navigate their way through a vast collection of 2012 Leo Messi stats, facts and achievements. Messi Matrix 2012 includes everything from the exact number of ball touches made to all the world-records broken in this sensational year for the player.

In addition to searching on specific stats, fans are able to compare Leo Messi’s performance throughout the year, by selecting a particular month from the Matrix timeline.

Messi Matrix 2012 features all 91 world-record breaking goals by the player, as well as the number of goals scored by Leo’s adidas adizero f50s during the year.

Messi Matrix 2012 celebrates Leo Messi’s year by visually documenting and calculating the stats his fans will love, such as performance by time in matches, top five stadiums played in, or the fact Leo achieved a 67% pass completion.

The Matrix also reveals insights like the fact that Leo Messi has been involved in more goals than any other player in the top five European leagues in 2012: 69 (56 goals + 13 assists).

Or the fact that Leo never scored any of his world record goals before the 11th minute of any match in 2012 and that the player is at his most prolific from the 76th minute.

What do you think of the Messi Matrix? Let us know via the comments section below or on our Twitter and Facebook pages.