And with the likes of Sir Alex Ferguson, Roy Hodgson, Michael Laudrup, Fabio Capello, David Moyes, Neil Lennon and Brendan Rodgers all in attendance, Sport-locker.net was keen to find out their thoughts…

Together, the collective experience of those in attendance amounted to over 15,000 matches!

If you’ve got a club like Manchester United, the pressure is always on to win and to be successful. When I joined 26 years ago we hadn’t won the league for such a long time and when we eventually won it there was a tremendous relief.

Also, it secures your position. When you get success you get control. Control is definitely the name of the game in modern day football.

Roy Hodgson on the benefits of managers meeting together…

We work in a business where you’re always learning. It doesn’t matter who you are, even if you’re Sir Alex Ferguson with 2,000 games I’m sure he would agree with me that you go home a little bit wiser because you’ve heard some interesting pieces of information from a lot of very interesting people in the room.

We can only hope that this forum will be the start of a regular event and that more and more people will be able to attend every year. 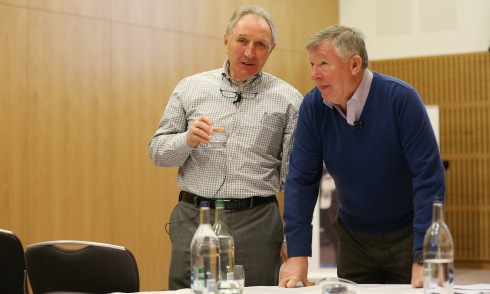 I think it’s the communication, the relations, with the media. I don’t talk only about the media when you hold a press conference; the media is there every time. Ten, fifteen years ago you could make a statement today and it would come out tomorrow or maybe tonight in the news.

Nowadays you make a statement now and in two minutes it goes out on Twitter or Facebook or whatever and it’s the same with the players. It’s 24 hours, even when we sleep you have to get the news out so I think communication is very important.

Obviously with the players and the media, it’s a big part of being a manager today. It’s not only on the pitch it’s as much off the pitch.

Fabio Capello on football in the next 10 years…

Tactically the new style is Barcelona, but if you try to copy the style it is a big mistake because the style you can only play with the players of Barcelona. But some (aspects) you can copy, the defensive style – when you lose the ball you go forward together to win back the ball quickly, never go back, never return to midfield. They lose the ball, they go forward. For me this is something new.

Ajax a long time ago played total football with offside, pressing forward. After AC Milan’s style was really important with Arrigo (Sacchi) and me – I followed the work Arrigo started – and now the new football is Barcelona, with a lot of ball possession. But you need the imagination of players like Iniesta and Messi – otherwise it is impossible to play this style. I think you need to find a solution and you need to know the value of your players.

I do not think I could put my longevity down to one reason. I think I have been driven to try to succeed from within but that would not be enough to get me the success I would hope to achieve. I have been very fortunate to work at a good club who have given me an opportunity, allowed to make mistakes which every manager will do.

So from that point of view the chairman at Everton has been very good. What I have tried to do is continue trying to progress, make myself better by going on courses, watching people work and like everybody else you always need a bit of good fortune to go along with it.

Neil Lennon on Barcelona and Messi…

I think what we’re seeing now in terms of the current Barcelona team and the current Spanish team, are probably the best footballing teams I’ve seen, ever, with Messi arguably the greatest player ever.

So, that’s what we all strive to be now. We can’t all be that way, we have to cultivate our own styles. But, I think we all like to play the game in the right manner and the right way and in an attractive way.

I think where we’re fortunate here in Britain is the diverse nature of the teams. Michael Laudrup mentioned it earlier and it’s something that when you study and when you look at the game abroad both in Holland and in Spain in particular, the teams pretty much play the same so the tactics for each game will more-or-less be the same.

So what do you think of the Castrol/LMA Manager’s and head coaches forum? Is it a good idea? Let us know in the comments section below or on our Twitter and Facebook pages.