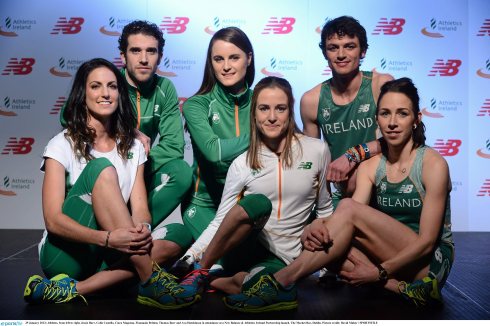 Sport-locker.net bring you a piece of news from the world of athletics this morning after New Balance are named as the new sponsor for Athletics Ireland in a multi-year deal.

The new partnership sees New Balance supply the Irish track and field team with a full selection of team wear, including performance apparel for use in competition in all Irish events, World Championships and European Championships.

New Balance will also supply training and warm up items and leisurewear for medal ceremonies, travelling and public appearances.

The inaugural collection is patriotic green and white with a gold trim. It was modelled at the launch in Dublin by New Balance sponsored athletes including marathon runner Ava Hutchinson, the 2010 World Junior Silver medalist, Ciara Mageean and the latest athlete to join Team New Balance; 5000m and 10000m runner Fionnuala Britton.

Ireland has always played an important role in the history of New Balance with sponsorships of several high profile athletes over the years such as Olympic Silver medallist John Treacy and two times World Indoor Champion Marcus O’Sullivan.

Ireland was also New Balance’s first foray into the European market in 1978 when the brand manufactured in Tralee.

What do you think of the deal? Let us know in the comments section below or on our Twitter and Facebook pages.