Last season did not end well for Manchester City but for Jack Rodwell it was a different story.

After injury disrupted the start of his season, Rodwell ended it strongly with an appearance in the FA Cup Final, scoring his first goals for Manchester City and earning a call up to the England squad for the friendly against Brazil.

The 2013/14 campaign brings with it plenty of change for the England international: new manager, new teammates and new football boots as Rodwell has swapped his beloved Predators for the adidas Nitrocharge. 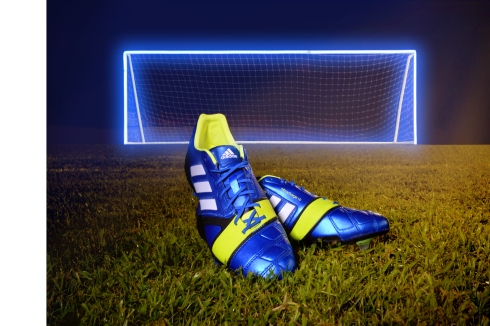 Sport-Locker.net caught up with Rodwell at an adidas event in Salford to discuss it all.

How have you found the Adidas Nitrocharge boots?

I wore the Nitrocharge boots on the last game of last season against Norwich and scored two goals. I’ve worn them a lot in pre-season too and I feel good in them. They’re comfortable which is the most important thing. There is so much technology in boots these days and they all look the part but it’s all about how they feel and they feel really good.

How will the Nitrocharges benefit your game as opposed to the Predators?

There’s a lot of technology in Predators that can create bend and that sort of thing. The Nitrocharge is a more simple boot and for a central midfielder like me that’s perfect. They’re also a little bit lighter which is a good thing.

You’ve worn Predators for years, was it a difficult decision to change?

Not really. Adidas asked me to wear them in training to see how they felt and they felt beautiful so it was an easy transition. Plus I’ve played one game in them and scored two goals so hopefully I can score 70 goals a season in these new boots!

Can you remember your first pair of football boots?

I don’t know what my first pair was but the first boots I can remember were the original Predators. They were the best on the market and Zidane wore them which is why I got them. They’re still great boots but the amount of technology that goes into football boots now is unbelievable compared to back then.

How would you assess your first season at Manchester City?

It was difficult because I got a few injuries but I’m over that now. I haven’t missed a training session in pre-season so hopefully I can kick on and play a bit more this year. There are plenty of new players at Manchester City this season. Were there any dressing room initiations?

We didn’t do any actually. At Everton we used to make new signings stand on a stool and sing in front of everyone. I was dreading it when I moved to City but I didn’t have to do anything. Adam Johnson tried to get me to turn up for training wearing my best suit but I got told he was winding me up. The new boys have got off lightly, I’ll have to have a word with Kompany about that!

How have the new boys settled in?

They’ve settled in really well, as the result on Monday showed. Fernandinho is a great player. Navas and Negredo are great players too and Jovetic is so talented for a young player. We’ve got a big Spanish influence in the dressing room now, which is a good thing. There’s the new signings, the backroom staff and the manager speaks Spanish obviously. They’ve all been great additions to the dressing room.

What are Manchester City’s targets for this season?

From a personal point of view, what are your hopes for this season?

My hope is that I can stay injury free and play more than I did last year. I only played 15 times last season through injury which was disappointing but, touch wood, I’m over that and hopefully I’ll get more games to show what I can do for the team.

Is the World Cup this summer in your thoughts?

Yes, definitely. It’s in the minds of everyone who has been in and around the England squad. It’s the ultimate for every player and hopefully I can play well this season and get on the plane to Brazil.

Finally Jack, we have a few questions of extreme importance to all of our readers:

Oasis or The Beatles?

Oasis. I love The Beatles and they’re probably the greatest band of all time but I’m going to have to pay tribute to the City fans.

Manchester or Liverpool? And why?

Manchester. When I was playing for Everton I used to go to Liverpool and Manchester for days out. There’s just more to do in Manchester – more restaurants, more shops and good nightlife. It’s a little bit better in every department.

What do you think of the adidas Nitrocharge? Who do you think will win the English Premier League this season? Let us know in the comments section below or on our Twitter and Facebook pages.