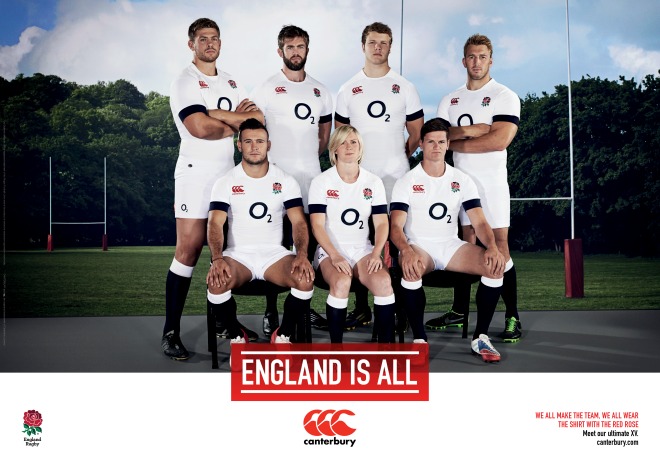 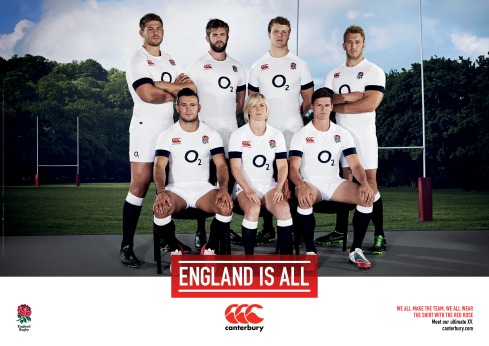 After we brought you news of the alternative kit launch, Canterbury and England Rugby have unveiled the new England home kit, which will be worn by the England squad during all of the QBE Internationals, as well as next year’s RBS 6 Nations.

The launch was held at Bruntcliffe School, in Leeds, which was selected to host the event thanks to its participation in ‘All Schools’, the RFU’s programme to get more state secondary schools playing rugby.

It was chosen from the 100 schools participating in the first year of the programme after demonstrating how the core values of rugby have been embraced by its pupils as part of a Rugby Football Union competition.

Combining the heritage and traditions of England Rugby dating back to 1871, with a modern design aesthetic, the new kit retains the classic colour combination of white shirts, white shorts and midnight blue socks.

Canterbury has introduced midnight blue detailing at the cuffs, with the iconic England rose on the chest completing a patriotic red, white and blue colour combination synonymous with England Rugby.

“Putting on an England shirt is a huge source of pride for the players and the white shirt is a critical part of England’s identity and our history and heritage. We want everyone to feel part of this England side, to feel a sense of connection and pride in the team and to inspire more people to play and watch rugby.” 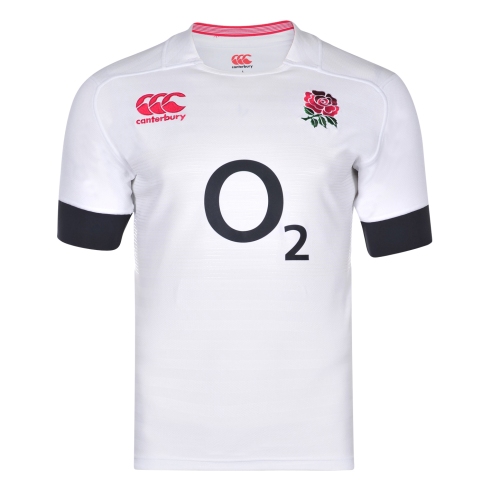 Canterbury is launching the new England Rugby home kit for 2013/14 by celebrating the unsung heroes of the game in naming its Ultimate XV.

Marking a continuation of Canterbury’s ‘England Is All’ campaign, which honours the contribution of the entire rugby family from grassroots to elite level, the Ultimate XV sees fanatical followers, committed coaches and vital volunteers from all levels of the game joining the England line-up, posing together for an iconic team photograph with a difference.

Designed using the benefit of over 100 years of Canterbury rugby expertise, the shirt has been engineered by Canterbury’s Innovation Team who have worked closely with expert partners and rugby players to create a highly technical shirt built to withstand all of the rigours of the modern game.

The ‘TEST’ edition of the shirt, which will be worn by the likes of Chris Robshaw and Geoff Parling, is produced using Canterbury’s high performance fabric, which delivers optimum strength and moisture management, for a lightweight and comfortable feel.

The fabric also delivers stretch, allowing a tight fit to help players evade tackles without restricting movement, while the Canterbury signature loop 21 neckline and triple-bar tacks are configured to increase the strength of the shirt at the usual vulnerable areas, vastly reducing the risk of rips and tears.

The shirt’s ball-deadening grip area gives a further nod to the heritage of England Rugby through its arrangement on the shirt as a series of tone-on-tone hooped stripes, subtly reflecting the red and white striped theme of the season’s Alternate kit and ‘1871’ premium leisurewear collection.

For fans, the shirt is also available in a ‘PRO’ version, styled in the same way as the Test edition with a looser fit, while a ‘CLASSIC’ edition will allow fans to get the look of the new shirt in a more traditional collared rugby style.

The new kit is available to pre-order now from store.rfu.com and canterbury.com

What do you think of the new England rugby kit? Let us know in the comments section below or on our Twitter and Facebook pages.