With the World Cup draw imminent Sport-locker.net is well and truly getting in the Samba spirit.

FIFA.com, the most visited football website in the world, has announced the launch of the Official FIFA App. The launch of the application coincides with the Final Draw for the 2014 FIFA World Cup Brazil™, which fans can follow live with the app on Friday 6 December 2013.

The FIFA app is expected to be the most downloaded sports application ever, with over 70m downloads forecast in its first few months. The application is built on the foundations of FIFA.com, which during tournament months can receive in excess of 7bn page views and 150m unique visitors. Featuring a rich and deeply personalised experience, the official FIFA app puts the world’s most loved game into the hands of fans like never before. Empowering football fans across the globe, the app combines the content that fans desire – anytime, anywhere.

At the heart of the application is the World Match Centre, providing unrivalled live coverage from over 200 national leagues and competitions across the globe, personalised by the fan’s favourite clubs and national teams.

The News section keeps fans up-to-date with the latest from the world of football as it happens, enhanced with stunning imagery and video.

As we approach Brazil 2014, the World Cup section provides exclusive official access to the biggest single-sport event in the world. The live coverage of the Final Draw will be supplemented by exclusive coach reactions as the groups and games are announced.

The FIFA/Coca-Cola World Ranking allows fans to track the official ranking of national teams across both men and women’s football.

The app also introduces FIFA Explore, a series of interactive journeys to enable fans to get insights into FIFA initiatives that support the development of the game and its mission to use football to build a better future. 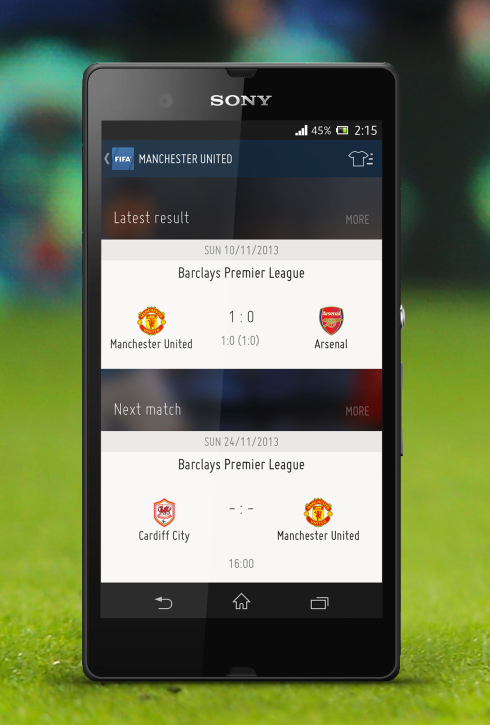 The app makes joining in the conversation easier than ever before, with seamless social interaction through Facebook, Twitter and the FIFA.com Club, the world’s largest online community of football fans.

FIFA President Blatter commented: “Our mission is to not only develop the game, but to touch the world and build a better future. With the official FIFA app, we are using mobile – the most personal technology ever known – to unite and inspire fans, ensuring they never miss a moment of the beautiful game.”

The app, available in English, Spanish, German, French and Portuguese, is free to download and available for iPhone, iPad and Android smartphone and tablet from today.

The official FIFA app will evolve over the coming months to provide an unparalleled digital platform to unite the hundreds of millions of fans for the 2014 FIFA World Cup Brazil.

What do you think of the new FIFA football app? Let us know in the comments section below or on our Twitter and Facebook pages.