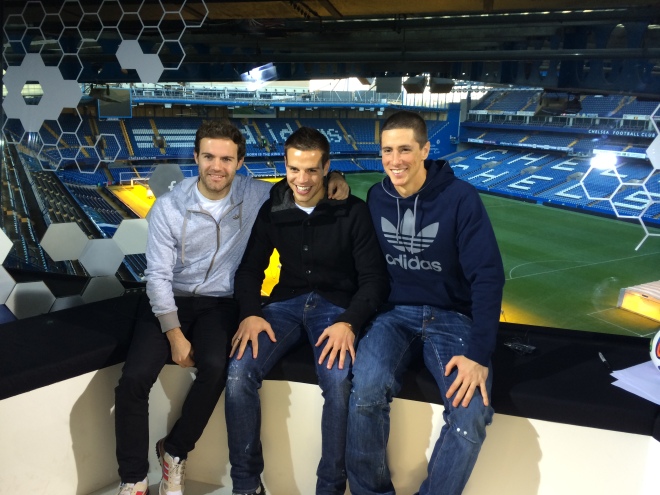 Chelsea players Fernando Torres, Juan Mata and Cesar Azpilicueta – swapped Stamford Bridge for a Digital Stadium as they took part in an exclusive Live video Q&A on Chelsea’s Facebook page, revealing everything from haircuts, to nicknames, to their best moments in football.

The Spanish internationals also talked about playing over the Christmas season and the possibility of a winter break. Mata explained that Boxing Day is “one of the most beautiful games”, where teams play to a packed stadium of young supporters, while Torres said that the sacrifices players make over Christmas are worth it for the fans.

The trio talked through their favourite moments in football, with Torres revealing how his debut for Atletico Madrid came five days after watching his boyhood heroes from the stands.

While Mata selected cup wins for Chelsea and Spain as his best moments, his favourite goal as a Blue came in the Premier League, following a pinpoint cross from his compatriot Torres. The playmaker selected his left foot volley against Manchester United in February 2012’s thrilling 3-3 draw as his personal highlight.

Over the past two weeks fans from around the world have sent questions for the club’s Spanish internationals on Facebook, which the trio answered in a live Q&A hosted by Chelsea TV’s Gigi Salmon.

The Digital Stadium event was a first – no other football club has previously brought their fans a live Facebook broadcast with three first-team players, and the Spanish trio, who are all active across social media, spent half an hour answering fan questions.

On the lighter side of things, all three joked at length about how full-back Azpilicueta is affectionately known as ‘Dave’ by fans, while they each talked through their love for Instagram pictures. As they discussed images, it came out that Torres gets his hair cut not at a boutique hairdresser but in his garden by his wife’s uncle!

The three also discussed the culture differences between the UK and Spain, with Torres revealing a surprise following his first Champion League appearance for Liverpool. The striker – used to the longer opening hours of restaurants in Spain – wished to go for a meal following the match but found that everywhere in Liverpool was already shut!

The event was streamed live to Chelsea’s 20 million Facebook fans – a milestone the club reached in just four years. Last week, the club shared a celebratory video on Facebook thanking their fans and commemorating the club’s achievements since they joined Facebook in 2009 – a period in which the club has won the Premier League, FA Cup, UEFA Champions League and UEFA Europa League.

For anyone who missed the chance to watch the event live, go to facebooklive.com and watch it again.

What was your favourite revelation from the live Q&A? Do you think Torres, Mata and Azpilicueta will help Chelsea win the Premier League this season? Let us know in the comments section below or on our Twitter and Facebook pages.