Sport-locker.net are huge fans of the film Superbad. We of course love football too. So combine the two, and you’re onto a winner!

adidas today released a new video with comedy production team Funny or Die, in which Hollywood actor Christopher Mintz-Plasse finds himself on a quest to discover the best World Cup party. 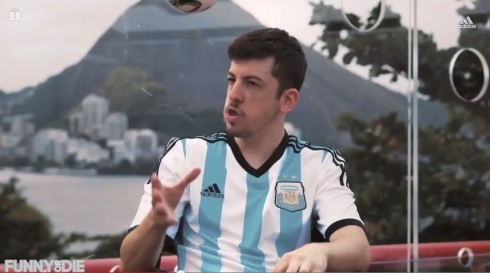 Filmed on location in Rio de Janeiro, and featuring cameos from adidas stars and legends including Fernando Hierro, Juan Mata, Cafu and Patrick Vieira, the sketch sees Mintz-Plasse on a journey through Rio as a roving reporter searching for a party with hilarious results.

Along the way Mintz-Plasse joins Fernando Hierro for the adidas miCoach Smart Ball Power Challenge, receives football tips from Juan Mata and trains with the Flamengo youth team, before talking Brazil and Argentina with Cafu.

Feeling disappointed with not being able to find any parties, it is left to French legend Patrick Vieira to explain that the World Cup and going to a match is the biggest party of them all.

What do you think of the adidas video? Let us know in the comments section below or on our Twitter and Facebook pages.