Sport-locker.net can reveal today that adidas and FIFA have officially handed over the adidas Golden Boot Trophy to Colombia’s James Rodríguez.

23-year-old Rodríguez ended the tournament with six goals, scoring in all of his five games, including a penalty kick in Colombia’s 2-1 quarter-final defeat by Brazil and a stunning volley against Uruguay in the round of 16.

Speaking upon receiving the adidas Golden Boot Trophy, James Rodríguez said: “I am delighted to accept this award on behalf of my family and my international team mates who have been there for me every step of the way.

“The tournament in Brazil was an unbelievable experience for me personally, but also for Colombia as a nation as the team reached heights we have never reached before. To finish the tournament as top goal scorer is a great achievement and I look forward to many more successes with Colombia and with my new club, Real Madrid.”

In addition to the handover of the adidas Golden Boot Trophy, and to further commemorate this award, adidas has also produced a very limited edition piece of footwear in the form of a specially designed pair of golden miadidas adizero f50s for James Rodríguez.

miadidas.com is the customisation section of the adidas website where consumers can create their own customised style of footwear based on their individual tastes. 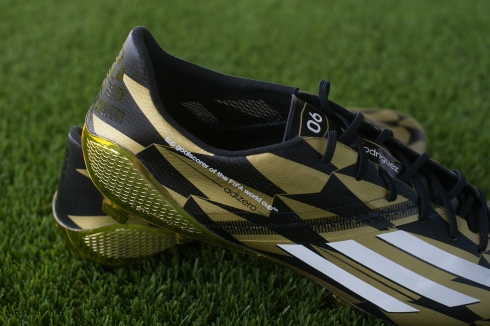 There are only six pairs of the miadidas golden boots in existence, one for each goal scored by Rodríguez during the tournament, and the boots include a special customisation on the side reading “top goalscorer of the FIFA World Cup”. The adidas adizero f50, as worn by players such as James Rodríguez, Leo Messi & Arjen Robben was the highest goal scoring boot of the 2014 FIFA World Cup Brazil. 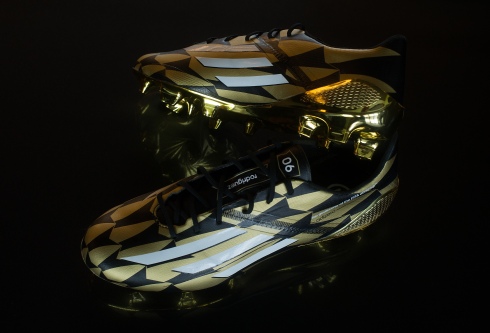 The first pair of limited edition miadidas boots will be given away today via a special activation on James Rodríguez’s personal Twitter account (@jamesdrodriguez) and via @adidasfootball. 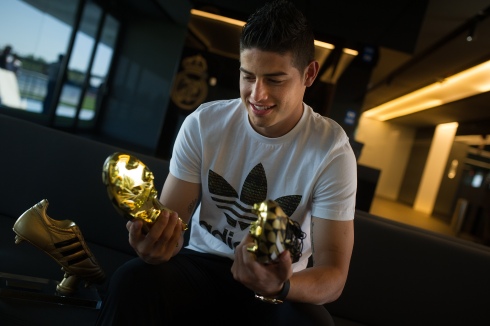 What do you think of James Rodriguez and his Golden f50 boots? Let us know in the comments section below or on our Twitter and Facebook pages.