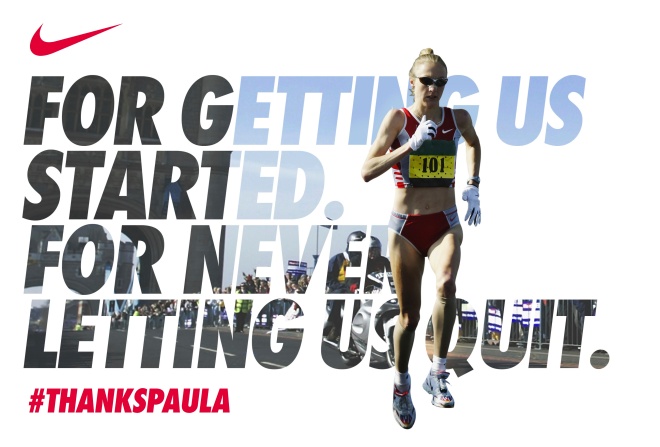 Paula Radcliffe owns one of the fiercest competitive spirits the running world has ever seen. But as she prepares to run the London Marathon on April 26, she knows that chances are unlikely she will add a fourth London title to her packed trophy collection.

The world record holder is approaching the marathon start line for the first time since 2012, when injury forced her to take a break from competition.

“I chose London as my goal because I knew it would be the most motivating one,” says Radcliffe. “It’s a special chance to run again a race and a course that have so many special memories for me.”

When an athlete has already built an incredible legacy, winning isn’t everything.

“Really I am just grateful that I can still run,” says Radcliffe. “This is not a massive big comeback. This is me going out and having fun – and that’s exactly what I intend to do.” 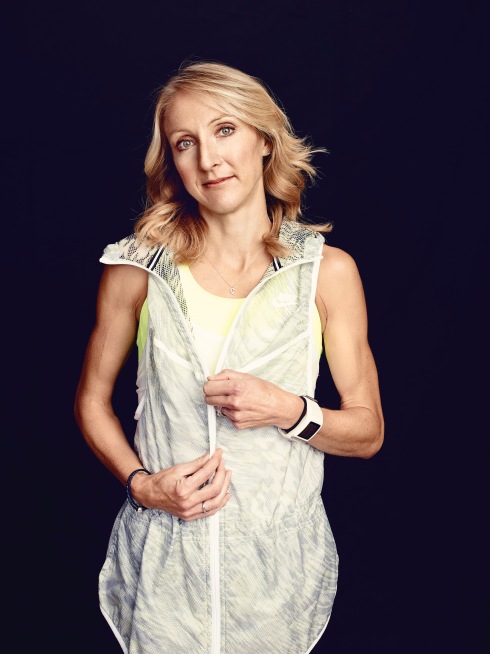 To say Radcliffe broke barriers in women’s running is something like saying Michael Jordan had a good jump shot.

“No British distance runner has made a bigger impact on the international stage than Paula Radcliffe,” says Sebastian Coe, legendary middle distance runner.

“Paula is a true pioneer of our sport,” says Steve Cram CBE, fellow middle distance great. “Not only did she break records and win medals, but she changed perceptions about what was possible for female distance runners.

Thousands have tried to follow in her footsteps but so far, none as quickly as her. In addition millions have been inspired by her ability, dedication and determination. Paula is still leading the field as she always has done.” 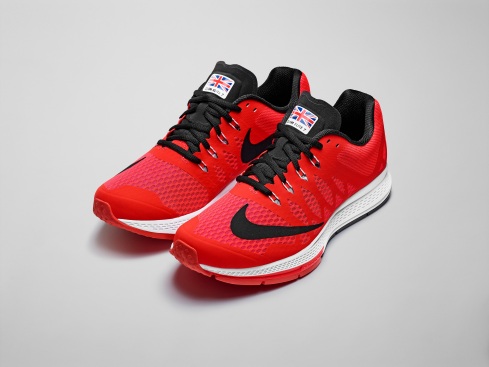 London in particular has long been a special place for Radcliffe. She raced her first full marathon in London in 2002, setting a European record in the process. She went on to run the three fastest women’s marathons in history, and in 2003, she set the still-standing world record in London.

Radcliffe’s women’s marathon record of 2:15:25 has stood for 12 years – the closest another woman has come remains almost three minutes behind. Radcliffe’s world record recalibrated what everyone believed was possible.

“It’s something I appreciate more as time goes by,” Radcliffe says. “When I ran it, I was really proud but also I felt like I was going to be able to beat it again. I don’t think I respected how much work had gone into it and how lucky I was in terms of everything coming together: not getting injured, the weather conditions being just right and just feeling good on the day.”

But in 2012, as she prepared to run for gold in London, she was forced to withdraw from competitive running, and underwent a bone graft on an 18-year-old stress fracture. The road since has been a long journey of recovery and rebuilding to prepare her for the start line once again.

“I’ve missed the buzz of racing,” Radcliffe says. “It’s hard to replace those adrenaline spikes. It’s something I’m good at, something I’ve put a lot of work into. But at the same time, I couldn’t run at all from July 2012 until last April, and I seriously thought I would never be able to run again. I’m grateful that I can just get up and run now.”

RACING IN THE SWOOSH

A Nike athlete since 2001, Radcliffe has been a Nike fan since her early days growing up in Northwich, Cheshire, England.

“My first pair of running shoes were the Nike Waffles – at the time they were called Wally Waffles for the kids. You couldn’t get me out of them,” Radcliffe says.

Her relationship to Nike footwear has only grown stronger. “Especially because I have had an ongoing foot issue throughout my career, I feel that without the support of Nike in developing shoes that worked for me, I wouldn’t have had as long a career as I did,” Radcliffe says.

To honor Radcliffe’s race this year, Nike created a special color of the Nike Air Zoom Elite 7. The palette pays tribute to the colors Radcliffe wore when she set the world record in London in 2003.

The shoe features details that commemorate the record, such as 2:15:25 on the sockliner and a Union Jack on the tongue. Radcliffe will also race in a singlet that bears the record time down the back.

THERE IS NO FINISH LINE

It’s hard for serious runners to say that any marathon is truly their last. “I chose London as my goal because I knew it would be the most motivating one,” says Radcliffe. “It’s a special chance to run again a race and a course that have so many special memories for me, but never say never.” 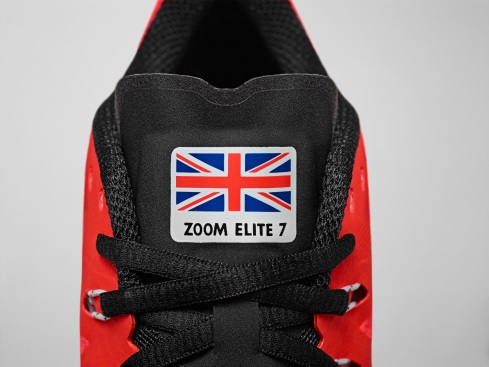 Radcliffe’s tremendous impact on running will continue for years to come. “I want to give back to the sport of athletics,” she says. “I feel it has given me so much. I love working with kids and encouraging anyone to get into running.”

For now, she’s expecting an emotional finish at Sunday’s race. “I’m probably underestimating just how emotional,” she says. “For the fact that it’s London, for all of the happy memories of growing up and taking part, for all of the times I couldn’t do it and I for the fact that I couldn’t run at all for a while. I never thought I could be back here.”

“I guarantee I will be disappointed with my time. Yet it’s a gift to get the chance to run it one more time, especially after not knowing if I would ever be able to run at all,” Radcliffe says. “I want to enjoy that magic atmosphere and appreciate the fact that I am able to run it, however slowly.”

“It’s a gift to get the chance to run it one more time,” Radcliffe says. “I want to enjoy that magic atmosphere and appreciate the fact that I am able to run it, however slowly.”

In celebration of Radcliffe’s race in London, Nike is launching a campaign to recognize her impact on runners at every level. The digital-led campaign will invite runners to share how Radcliffe has inspired them using the hashtag #thankspaula.

Are you running the London marathon? What do you think of the new red Nike Air Zoom Elite 7 running shoes? Let us know in the comments section below or on our Twitter and Facebook pages.

A fresh start. Today, @adidasfootball have launched the Uniforia boot pack. Would have worked perfectly with the Euro 2020 ball! Comment with your favourite boot from the pack below 👇 We’ll start: Predator (with the 🇪🇸 kit) #adidasfootball #Uniforia #SportLocker
Yessss @adidaslondon 😷 Coming this week... And in the UK, £2 from every pack of 3 Face Covers purchased is donated to Save The Children’s Global Coronavirus Response Fund, running until June 30 #HomeTeam
Light at the end of the tunnel 🇯🇵 🙏🏻 🇯🇵 We’ve been very quiet on here recently but this whole lockdown situation has been tough. Not seeing friends and family, generally worrying about Covid 19 and of course, no football. But today we had a surprise delivery from @adidaslondon and it’s fair to say our mood has shifted to a more positive one. These remakes are off the scale. Stay home. Stay safe. Nearly there. #HomeTeam #LockdownPickMeUp #adidaslondon
Love @wrightyofficial Love #HomeTeam Stay safe everyone.
ISOLATE. Just Do It. Please 🙏🏻 🏡 🙏🏻 Hoping everyone is doing their best to help the NHS and staying at home. @notjustclothing are donating £5 from every sale of these t-shirts to @trusselltrust food banks all over the country. #StayAtHome
Game cancelled this morning - so it’s going to be a while until we can try the @adidasfootball Predator 20.1 out in a match. First impressions at training this week were mad though. The Predator is back. #adidasfootball #Predator20 #Predator #SportLocker
Hypervenom or Mercurial vibes? The @nikefootball "Future DNA" Pack brings classic Nike Football design to one of the brand’s latest on-pitch innovations. The best is still to come. Trust. #NikeFootball #SportLocker
Low cut vibes 💯🔥💯 Not been this excited to try out a boot in a long long time. Shoutout @adidaslondon for sending us the Predator Mutator 20.1! #Predator20 #PredatorMutator #SportLocker
Really really really enjoying these. #Predator20 #PredatorMutator #SportLocker
Great to get out there and blow of the cobwebs at the @adidaslondon #FasterThan event this week. Stay tuned for the #SL20 Giveaway this week! #adidaslondon #adidasrunning #SportLocker
Didn’t think it was possible for @fcbayern ‘s sauce levels to increase. But it has. @adidasfootball dropping this special-edition jersey marking the club’s 120-year anniversary!
Sum up the @nikefootball Mercurial Dream Speed 2 in one emoji. We’ll start: 🍆 #NikeFootball #Mercurial #DreamSpeed2 #SportLocker
Spurs won’t be playing with this @adidasfootball beaut for too much longer then. #UCL #adidasfootball #OMB #Istanbul #SportLocker
TUNNEL VISION Who rates the new @nikefootball x @premierleague "Tunnel Vision" Merlin? You’ll see it first time on pitch during the Chelsea vs Tottenham Hotspur fixture on February 22nd. The ball is available from today (February 17th) on Nike.com #TunnelVision #NikeFootball #Merlin #SportLocker
They’re back /// @adidaslondon #Predator #Mutator #SportLocker
When @kaka is the ringer and you still have the audacity to ask for the cutback 👀 #Predator #RentAPred @adidaslondon
Behold the @nikefootball Air Zoom Mercurial - Nike’s concept football boot that is built around a full-length articulated Zoom Air bag that provides a unique underfoot sensation and enhanced energy return! For the first time in football, the boot also features a Nike Flyprint upper. Flyprint is Nike’s first 3D-printed textile upper in performance footwear and debuted on the Nike Zoom Vaporfly Elite Flyprint, worn by marathoner Eliud Kipchoge. Madness. #NikeFootball #Mercurial #AirZoomMercurial #SportLocker
@nikefootball are absolutely owning the football kit game right now. The new Nigeria & Korea kits are absolute 🔥 Choose one. #naija #NikeFootball #SportLocker