Over the years the Umbro Speciali has had different faces however one particular style made its mark in the hearts and minds of players across the world…and now it’s back. Forever. 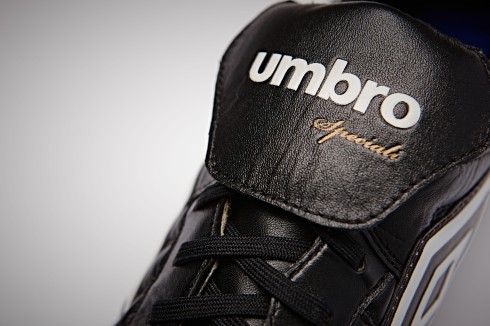 From July 1, the black/white/clematis blue Speciali ‘Eternal’ will become a permanent fixture in Umbro’s boot collection.

Whilst Umbro has remained true to its classic design, the Speciali Eternal isn’t simply a reproduction of the original, but has been re-engineered to meet the more demanding performance needs of the modern game.

The lightweight soft leather upper, offering the supreme comfort and durability which the original became famous for, is a key feature of the Eternal.

When the Speciali was first released in 1992, it was the lightest football boot on the market. In a world obsessed with graphic print and weight, Umbro has stayed true to the original and made comfort king.

On the boot, Umbro’s A-Frame overlay offers exceptional support and stability, while the iconic fold-over tongue also returns but with a touch fastening to keep it in place.

One of the most memorable features of the original was the ‘Wishbone’ outsole. The new ‘Wishbone’ technology allows for controlled support throughout the full length of the soleplate providing increased rigidity in the mid-foot and controlled flexion in the forefoot.

A matt finish on the outsole completes the classy look of the Eternal.

Portugal and Real Madrid defender Pepe will give the Speciali Eternal its on field debut on 18th July in the pre-season friendly against AS Roma in Melbourne, Australia.

The iconic Speciali has returned and is ready to make its mark on the game once more.

What do you think of the new Umbro Speciali? Let us know in the comments section below or on our Twitter and Facebook pages