Sport-locker.net have stayed up all night to reveal the news that adidas has reunited with Manchester United to unveil the new home kit for the 2015/16 season!

Taking inspiration from classic three-stripe United kits from the 1980s, adidas have re-engineered these iconic designs with a modern twist, taking familiar style features that were loved by the fans and combined them with the latest performance technologies to produce innovative, modern classics.

The new looks shirts include the latest in adidas lightweight and breathable technologies to ensure the players take to the pitch with the most innovative kit design ever. 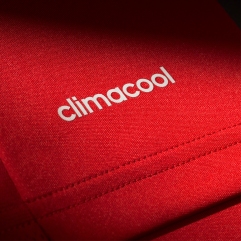 The new home kit, which will be debuted in the opening game of the season at Old Trafford, features a classic v neck cut collar and three stripe design down the shoulder.

There is also a graphic design on the hem of the shirt taken from the 1990 shirt famously worn by Ryan Giggs in his debut season.

The design of the new kits has been a personal passion for adidas designer, Inigo Turner who is a lifelong Manchester United fan.

Turner comments:  “At adidas we have been on a real journey in creating these new kits for Manchester United. This landmark sponsorship is not the first time we have partnered with the Club and it is with these iconic kits of the past that we drew our inspiration from.

“We have aimed to break expectations by re-engineering simple but impactful design features such as the classic v-neck collar and the iconic three-stripe detailing down the arms as our commitment to giving Manchester United a truly ground breaking kit for the 2015/16 season.”

The new look shirts will be launched as part of the “Break Expectations” campaign, released by adidas to demonstrate the start of a new era for the football club as they return to the UEFA Champions League and start the 2015/16 season. The campaign imagery and short films are inspired by the club’s iconic trident taken from the club crest and used by the players to set the tone for the forthcoming season.

What do you think of the adidas Manchester United home kit for the 2015/16 season? Let us know in the comments section below or on our Twitter and Facebook pages.