Sport-locker.net brings you one of the boldest strips for the 2015/16 season – the Nike Manchester City third kit!

As Manchester City grows in global stature and vies for major titles, the club’s heritage remains integral to its identity.

This season the club will play some of its biggest away matches in a kit inspired by a truly momentous playoff victory that secured the team’s promotion from the third tier of English football.

Faced with a 2-0 deficit against Gillingham FC at Wembley, Manchester City scored two goals in injury time and ultimately triumphed 3-1 in the ensuing penalty shootout.

Paying homage to this pivotal match in Manchester City’s history, the green trim from the club’s yellow and black 1999 shirt provides the bold colour palate for this new Night Rising third kit.

A black ombré graphic accentuates the striking green, blending from the cuffs of the short and shirt. During night games, this effect serves to accentuate the players’ physical presence underneath the floodlights. Black socks, with dark grey chevrons on the calf, further this powerful framing of body.

The shirt, which is finished by a lightweight crafted collar, proudly bears a modern take on the club crest that aligns with the distinctive two-tone colour scheme throughout the kit. 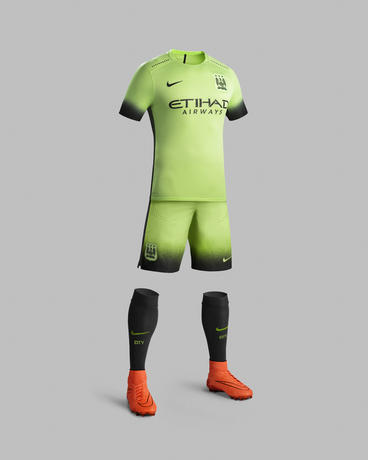 The 2015-16 Manchester City Night Rising third kit will make its on-pitch debut against Sunderland A.F.C. on September 22ndand will be available from www.nike.com, www.mcfc.co.uk/shop and select retailers starting October 1st.

What do you think of the latest Nike Manchester City third kit? Let us know in the comments section below or on our Twitter and Facebook pages.