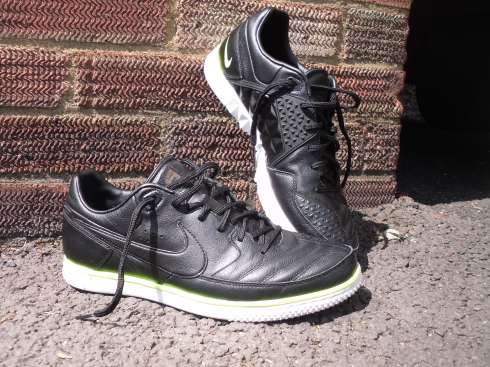 Here at SportLocker, we’re pretty up to date with the latest footwear trends.

Which means that we are clued up on what not to wear (nothing to do with those Trinny and Susannah birds) on our feet.

But the latter fashion faux-pas could be about to change!

And that’s because Nike have sent in a pair of their new 5-a-side shoe, the Nike5 Gato Street!

And never one to miss out on a playtest, Sam Van Gelder onto the mean streets (they’re not gangster at all, really) and here’s what he thought of the uber-cool urban bad boys:

Time to have a brief look into the technology found in Nike’s most versatile small-sided shoe to date:

–       Perfected Shape – Snug and close for great fit and ball feel for the 5-aside game. 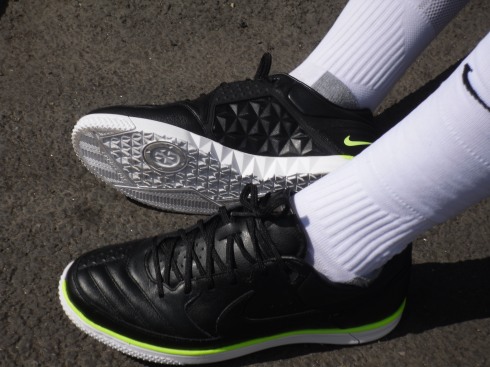 Back in Brazil and Uruguay in the 1930s, due to a lack of open space in their overpopulated cities, a variant of football that could be played simply requiring less space was created.

Football today isn’t just about the 11-a-side game. Its smaller cousin is as vibrant as ever, and in some quarters across the globe, even bigger.

Whether it’s Futsal, Calcetto or 5-a-side, football is played in variants of a small-sided game.

And the real passion lies not in packed all-seater stadiums but on the millions of courts, halls, cages or pitches all over the planet.

Basically, the concept is to create a boot that can deal with all the technical demands of the small-sided game, no matter which part of the globe you are playing.

And Nike have taken inspiration from four of the world’s most famous cities:

–       Tokyo – the headline feature of the Gato Street draws inspiration from the dazzling illuminations of Japan’s capital city. The innovative prism patterned instep has been created to increase pass power and accuracy, as well as first touch friction.

–       Barcelona – following in the footsteps of the great 11-a-side team, it’s all about touch and playing at high tempo in this region of the world. So a flexible upper and adaptive traction sole will meet the demands of this type of player.

–       Rio De Janeiro – as you well know, Brazilians love showing some skill and flair on the pitch. Expressing yourself is paramount. The new responsive shape and specially designed last allows players to get closer to the ball.

–       London – Where metal cages are the norm, it’s all about durability in this region! A tough shoe is essential – which is why the upper is padded and moulded to minimise scuffs and tears caused by player contact. The enhanced cushion insole and tough outsole means that the Nike5 Gato Street can get bludgeoned and still remain intact.

So after identifying the regional needs of small-sided football throughout the world, Nikehave designed the Nike5 Gato Street – and it is set to take the footballing world by storm!

There are seven colourways of the Nike5 Gato Street – with each unique colour representative of each city’s characteristics.

And I was really impressed with the Black/White/Volt colourway as I took them out of the box.

At first glance, they reminded me more of a leisure shoe, like an Air Force 1, than a football shoe.

The prism technology immediately reminds me of the CTR360 Maestri football boot, so I was interested to see how this would impact performance.

Yet, despite looking like a pair of trainers, they felt like a solid boot in hand, and nothing like I’d seen before in a 5-a-side shoe!

However, I did have a slight fear about the toe box area, as it appears quite raised, so I wanted to see whether you could get a good connection with the ball, and indeed get underneath it.

The only problem was that I didn’t know whether to wear them for a game of football, or to bust a pair of jeans with them!

That said, the only way I was going to be able to do this review was by donning some football attire and getting them out on the street – so off I bopped to my local car park.

As soon as I put them on, they felt incredibly comfortable and offered a silky smooth sensation.

Yet they still didn’t feel like a football shoe, but very much like a leisure shoe. But then I guess that is exactly what this boot is all about – having fun whilst enjoying playing the beautiful game, in its smaller form.

But as soon as the ball was introduced, my fears were put to bed, and the shoe came into its own.

I was completely shocked to feel just how good the leather actually was on the boot.

They offered a great touch, and the sole dug into the concrete and I was able to change directions and manoeuvre the ball comfortably.

I also tried my hand (well feet) at some footballing freestyling. But that failed miserably!

Nike always come up trumps in terms of producing pioneering technology that help catapult football boots to the next level.

And the prisms used in the Gato Streets are proof once again that Nike can design football footwear with technology that you can get tangible responses from.

The ball bounces a lot less true on surfaces such as concrete, but the instep definitely aided the controlling and passing of the football.

With no goalposts (or jumpers) I had to turn to a brick wall to ping balls at.

I can report back a very solid connection. The Gato Streets are a really sturdy feeling shoe, but it doesn’t feel like you are kicking the ball with a leisure trainer – despite what it may look like.

They are very much a football boot in their own right. They really were ticking all the boxes.

So I dusted myself down, put on a pair of jeans, and it was off to the pub in my Gato Streets! 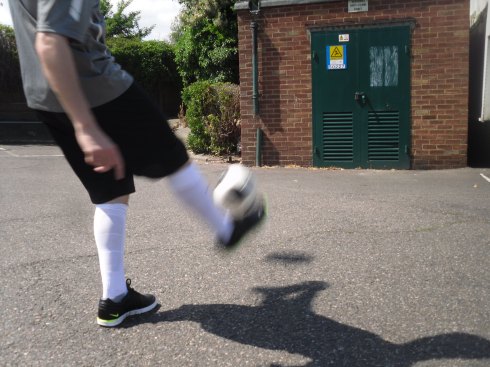 Put simply, these are yet another masterstroke from Nike. They’ve designed a shoe fit for purpose wherever you decide to play your football!

Hard-wearing, inventive and comfy – they really are a revolution in 5-a-side footwear.

And that’s because of one major factor: never has the transition from a five-a-side match to the pub been so smooth!

Not only have you got a trainer that works brilliantly on the pitch, but also one that looks equally as comfortable down your local watering hole.

So I’m raising my glass, and here’s a toast for the Nike5 Gato Street – cheers people!