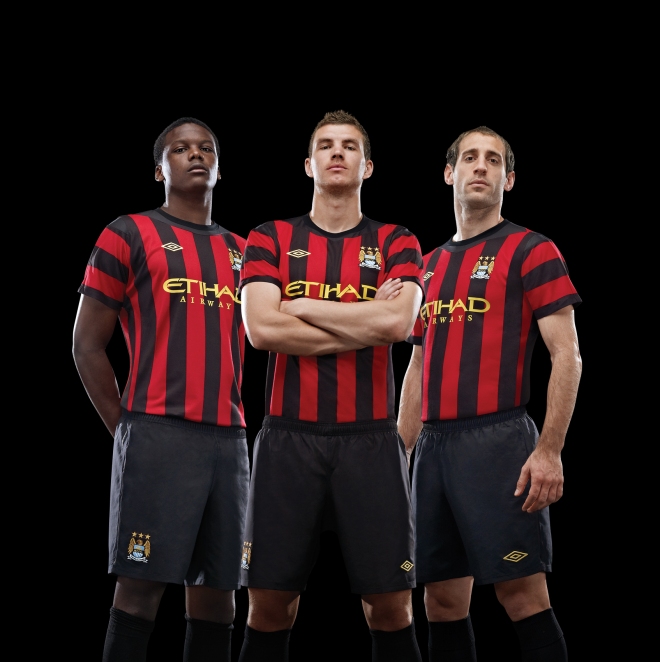 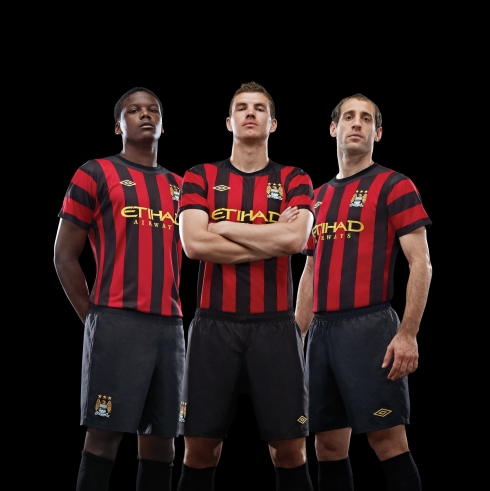 With the 2011/12 Premier League season edging ever closer, SportLocker can offer a glimpse into the future with the release of the brand new Manchester City away kit.

The inspiration for the 2011/2012 away kit is taken from the most famous shirt in the club’s history – the black and red shirt worn in 1969 and 1970 during which time City won the FA Cup, League Cup and European Cup Winners Cup.

To achieve the ‘tailored’ Umbro look for the 2011/2012 away shirt, the Umbro kit designers draped black and red fabric over the silhouette of the modern day ‘arms out’ goal celebration.

The shirt is designed so that when a player celebrates a goal or links arms with team mates, the black and red stripe remains consistent. For this reason, there is no seam on the underarm as traditionally stitching can distort the shape and flow of a stripe.

The stripe width on the shirt was inspired by the old 1969 kit. The long sleeve version features an all-black forearm so that there is a unified stripe-look when the players link arms in goal celebrations. 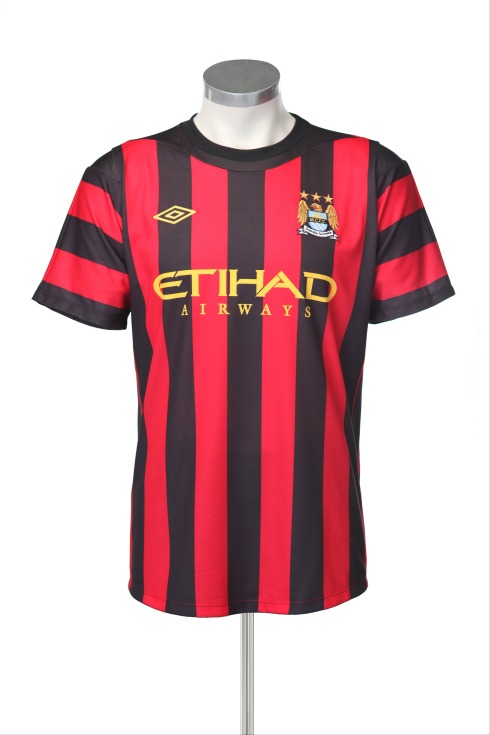 The club crest and sponsor detail is key-lined in gold in order to give standout against the black and red. City’s home colour, sky blue, is featured within the crest so that the away kit always carries a piece of ‘home’. Black stitching is used on the cuff of the shirt and an equal amount of black and red is featured on the hem.

David Blanch, Senior Designer at Umbro, said: “Umbro’s kit designs for City are centred on being modern – not retro. So with this shirt, we married the aesthetic of the 1969 shirt with the modern day ‘arms out’ goal celebration. The result is a shirt which is a celebration of both the future and the past.

“This is a football ‘shirt’ in the truest sense – we have combined modern day football tailoring to end up with a shirt which combines both performance and smartness. Stretch mesh is a key component to allow players to move freely and their skin to breath during matches. Every minor detail within the shirt has a reason for being – nothing is simply ‘there’.

Blanch added: “City fans will be pleased to know there is more black than red within the shirt.”

The shorts are plain black and include the club crest whilst the socks are black and similar to the shirt, feature two bands of red.

Trevor Cairns, Chief Marketing Officer for Umbro, commented: “We know that the black and red ’69 shirt is a fans’ favourite and we are delighted to bring it back but with all the performance benefits for the modern game – especially in what is an FA Cup winning season. This is not a retro shirt but a celebration of the past, present and future of the Club.”

The new Manchester City away kit is available for pre-order now and will be on sale from 23rd June.