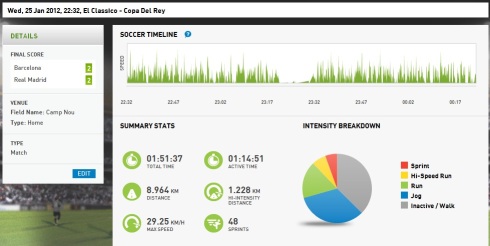 Everyone here at Sport-locker.net was absolutely buzzing about the Dani Alves screamer for Barcelona against Real Madrid in the El Clasico last week!

And we were even more excited when his adidas miCoach stats got pinged to our inbox earlier today.

The Brazilian pinged a strike into the top corner (with his adizeros) to help guide Barcelona into the Copa del Rey semi-final – and he’s got some pretty impressive stats from the game as well.

The Speed_Cell data shows that he had to work hard in both attack and defence for his team against Real Madrid, but was still able to play a hi-intensity game even into the later stages.

To learn more about miCoach services and how to improve your performance go to – www.micoach.com.

We’re trying out the adidas f50 adizero miCoach currently so look out for the review!

Are you signed up to miCoach? If so, get sharing your stats on our Twitter and Facebook pages.