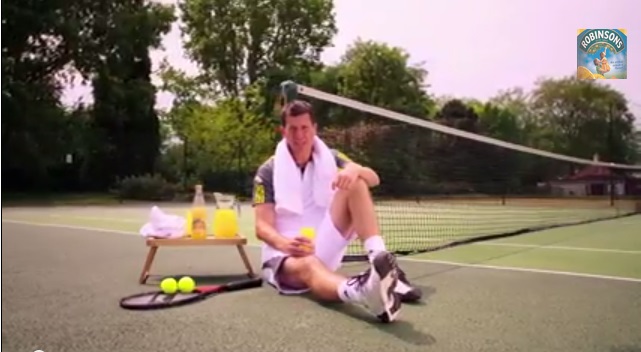 For all you nostalgic British tennis fans out there, Wimbledon fortnight is the time of year when pining for ‘Tiger Tim’ is at its most intense.

He may not be gracing the green, green grass of SW19 anymore but Sport-locker.net is relieved to see and reveal that Henman is not too far away from the action supporting Robinsons long-standing Wimbledon sponsorship by starring in a video showing his training regime… but with a twist!

The video aims to encourage families to get outside, run around, work up a sweat and ‘Play Thirsty’.

Robinsons have been proud sponsors of Wimbledon since 1935 and this year the aim is to get families to go outside and work up a thirst.

The video shows Tim going through his workout routine, but as the camera pans out it is apparent that it is not the routine that we would come to expect.

Tim said: “‘Play’ has been very important to me throughout my life and career – I have definitely worked up a thirst whilst playing the game that I love. Britain has such great outdoor spaces to run around, and I encourage families to get out there and play. Robinsons is a great British brand and has been associated with Wimbledon for almost 80 years, and I’m happy to be a part of that”

Are you enjoying Wimbledon 2013? Who do you think will win the men’s and women’s titles? Let us know in the comments section below or on our Twitter and Facebook pages.

One thought on “VIDEO : Tim Henman ‘plays thirsty’ for Wimbledon with Robinsons”