Sport-locker.net are gearing up for what is the biggest game of the Premier League season – it’s the Manchester derby!

Usain Bolt, the World’s Fastest Man, caught up with Manchester City’s star striker Sergio Agüero to give him a unique lesson in speed!

Having identified Agüero as City’s most dangerous player, the Jamaican United fan pretended to help Sergio pep up his pace, but as the session progressed it became apparent he had an ulterior motive.

His passing was excessively poor, and saw the Argentinean running around all over the place in his attempts to keep up. Instead of sharpening the striker’s sprinting skills as suggested, Bolt seemed to be trying to exhaust Agüero and influence the Manchester Derby in favour of his team. 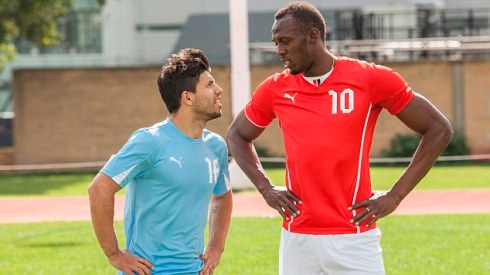 After the training session, Agüero commented: “Usain was terrible at the beginning, but I realised after a while that he was just trying to wear me out. When he started to play properly, he showed some skills though. He is not good enough to play for City, but I think he would have a good chance of getting into the United team.”

Usain Bolt admitted: “Sergio’s caused United a lot of problems over the years, so I thought I’d drop in on him to see if I could tire him before the game on Sunday. But turns out he’s pretty fit.  I have to admit I was impressed with his qualities, United definitely need to keep him quiet but I’m sure they can do that and get three points.”

The Bolt Agüero training video was released by PUMA, who launched the latest edition of the evoSPEED 1.2 football boot this week.  The new purple and orange evoSPEED boots featured in the film was worn on pitch by Sergio Agüero himself for the first time this week.

Who do you think will win the derby on Sunday? Let us know in the comments section below or on our Twitter Facebook pages.