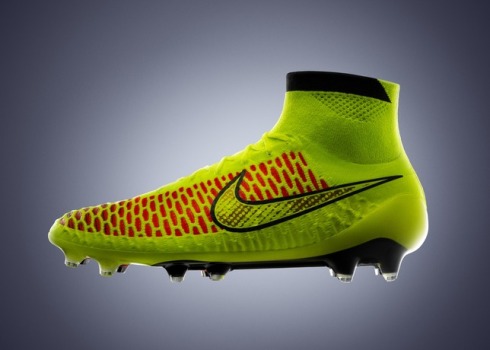 Sport-locker.net are beyond excited to show off Nike’s latest ground-breaking innovation in performance footwear – the radical new Magista football boot!

Providing improved fit, touch and traction, the boot is designed for the needs of the creative playmaker.

Nike Flyknit technology has been engineered for football for the first time, allowing the foot to get closer to the ball and to deliver enhanced ball-feel and control.

Set to redefine the concept of how football boots look and perform, the boot was unveiled by Barcelona playmaker Andrés Iniesta in Spain today.

Born from four years of R&D in the Nike Sport Research Lab and with feedback from some of the world’s best attacking playmakers, including Barcelona’s Andrés Iniesta and German forward Mario Gotze, the Magista is designed to enable devastating creativity in a game where space is at a premium.

Flyknit technology delivers unprecedented feel, fit and control by creating a second-skin, sock-like feel and allows for strength and support to be knitted directly into the boot. The Magista also features a new mid-cut Dynamic Fit Collar for a more locked-down fit and increased awareness of the body’s movements and interaction with the ground and the ball.

The Magista is designed for the player who is always moving, creating the attack and dictating play. In a game that is faster than ever — both mentally and physically — space is at a premium and high-speed control is essential. While the Magista player is constantly creating opportunities on the pitch, he needs to focus on seeing ahead, seeing the pass that no one else can see. The Magista liberates the player to unlock his fullest potential and focus on that split second that could change the game.

“The fit of this boot is so unique that I don’t think about it when I’m wearing it,” said Iniesta. “It allows me to move the way I need to instinctively and with more confidence.”

Nike Flyknit – which was first used in Nike running shoes in 2012 and most recently in the KOBE 9 Elite basketball shoe – defies conventional shoe manufacturing processes by creating an engineered upper woven from special yarns.

Utilizing a custom Nike last and Nike Flyknit construction, Magista offers a snug fit at the arch, heel and forefoot, and the added element of a Dynamic Fit collar hugs players in, locking them down in the boot.

As Nike’s design team worked to perfect the collar height, they found through player feedback that the Dynamic Fit collar not only provided a more locked-down fit, but that players also felt more confident and more aware of their movements.

To provide additional strength and lock-down for multi-directional movement, designers added Brio cables. These cables are knitted directly into the one-piece upper and lock the eyelet into the outsole, creating strength similar to a suspension bridge. 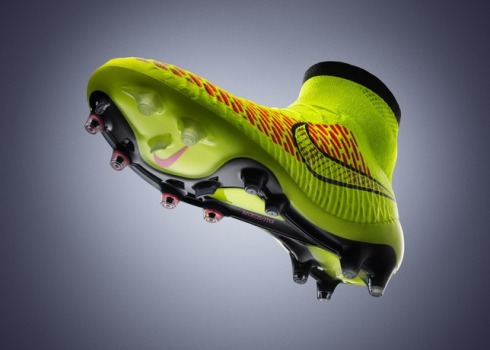 For consistent contact and increased control, the Magista features a 3D-knit textured upper. The Magista player needs a more aggressive texture to create friction on the ball for accurate dribbling and striking.

To protect the foot from water and cold, Nike’s design team developed a special application of NIKESKIN placed over top the Flyknit. The skin is less than 0.1 mm thick — thinner than a sheet of paper — and melts onto the knit to help protect from water that provide protection.

The Magista player stops, decelerates and moves in multiple directions while controlling the ball. For this player, Nike added 360° rotational traction through conical studs and a Pebax®-and-nylon plate to improve traction.

Compressed nylon offers a highly responsive plate that delivers strength while remaining incredibly light. Combined with Pebax, the structure allows for flex and increased movement with the foot while eliminating mechanical flex (an area where the boot always flexes in the same spot).

Nylon extends to the big toe and acts as a chassis to help players plant and then spring off the ground for more explosive speed. Nike also removed the insole board to place the player closer to the ground for a better center of gravity and enhanced traction. Finally, the entirely conical stud configuration is unique to the Magista, enabling 360° rotation. 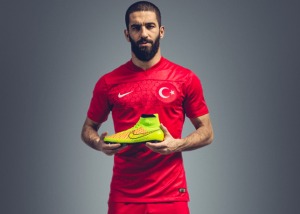 The Magista will be available for pre-order at www.Nike.com on April 29 and to purchase from May 22.

What do you think of the Nike Magista football boot? Let us know in the comments section below or on our Twitter and Facebook pages.