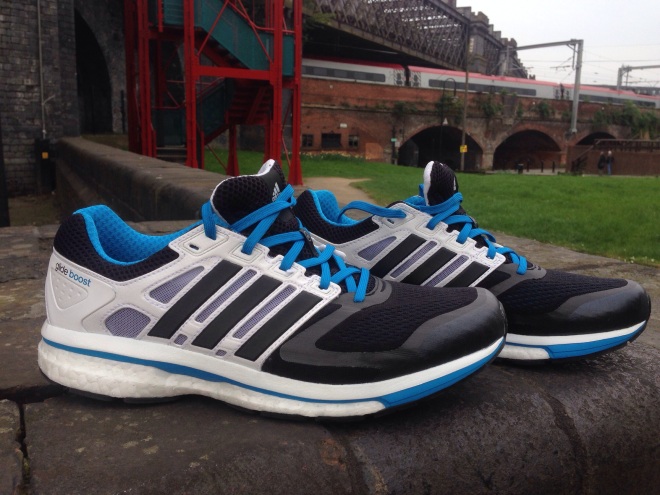 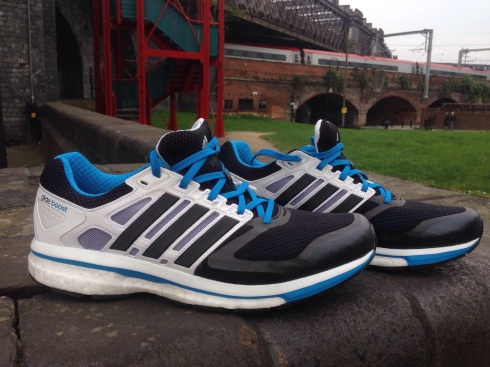 We’re already HUGE fans of the adidas Energy Boost so we were intrigued to see how their slightly more protective brother got on during our road test.

As you may or may not be aware, I’m not your serious runner. I mostly fill up my exercise time with playing football and the gym, with the occasional 10k run thrown in to keep my fitness ticking over.

However, now that the football season is drawing to a close, I want to make more of an effort to get out on the streets and get some miles under my belt.

After all, I absolutely loved the utterly bonkers adidas Thunder Run last year, and one of my ambitions is to run a marathon. Eventually. I hope. Maybe.

So with the delivery of these gorgeous looking adidas Supernova Glide Boost running shoes, I had no excuse but to get out there and run.

In one word. FRESH.

These are stunning in hand and I fell immediately in love with the Black / Running White colourway. The splash of blue is a great addition and I’d be quite happy wearing these with a pair of jeans.

There is absolutely no danger of looking like a weekend dad in these bad boys!

They feel incredibly light to hold, yet slightly more substantial than the Energy Boosts. From first impressions, I was getting nothing but positive vibes. 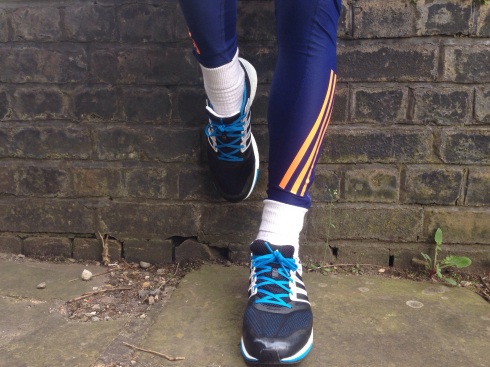 We’re often inundated with emails from PRs saying that their new product is the most ‘innovative’ or ‘revolutionary’ ever.

Sometimes this is genuinely the case. Whilst we never received such an email regarding these adidas Supernova Glide Boosts, they are jam packed with technology that can’t be found on other brands’ running shoes.

–          The BOOST technology aims to provide a higher energy return than any other foam cushioning material in the running industry. It combines soft comfort with responsive energy.

–          The breathable, contoured engineered mesh makes each movement natural and provides pinpoint support when and where you need it.

–          There are two bits of technology on the sole of the shoe. The torsion system is a full-length stability bar that allows your heel and forefoot to move naturally, and your midfoot to remain flexible and stable.

–          There’s also a high performance continental rubber outsole that grips the ground for better traction and a powerful push-off so whatever the weather, you remain in control.

Once I had digested all the tech talk, it was time to see if they were as reliable as a tin of Ronseal…

In short, it’s safe to say that these live up to the billing.

The cushioning is something that’s hard to put into words. The smooth transition from landing to toe-off is a joy to behold and makes for a lovely ride.

Comfort is a huge thing for running shoes and these deliver, and then some. As soon as you put them on and hit the pavement, it feels as if you have been wearing them for miles.

The toe box is nice and roomy (enough to maybe drop half a size from what you normally wear) and the upper is extremely well ventilated thanks to the mesh and overlays that feature on the side of the shoe.

The slightly padded ankle collar and tongue means that I would favour these over the Energy Boosts for longer distance runs, whilst the torsion system on the midfoot area of the outsole really does add to the supportive feel.

There’s also no messing with the Continental™ Rubber outsole. You won’t be slipping anywhere with this at the bottom of your running shoes!

As you can see from the photos, I’m also sporting some rather lovely (if I do say so myself) adidas London Marathon clobber. 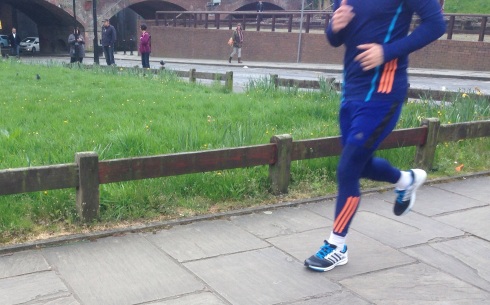 For the photoshoot (*DISCLAIMER: The photos were not taken by a professional photographer*) I opted for the Supernova long tights and the London Marathon long sleeve tee.

The missus had a quip that I’m the stereotypical runner with “all the gear, and no idea” – which may be true – but I felt supremely comfortable.

The running t-shirt includes ventilated climacool® to keep you dry. Despite running myself into the ground setting a 10k PB in my first run in this outfit, sweat appeared to be relatively non-existent in the t-shirt.

Despite it also being a fitted fit, it felt light and well ventilated during the run – I highly recommend this t-shirt folks! 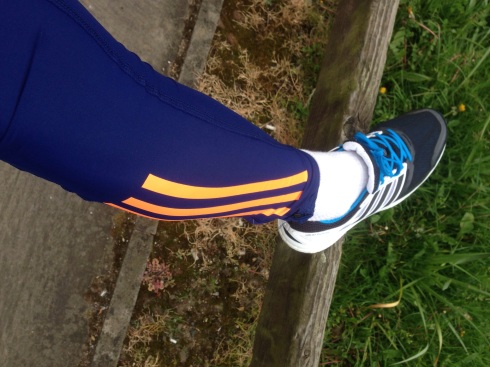 The same can be said for the Supernova tights. It took a while to squeeze into them but once on they really did add another dimension to the run.

The boffins at adidas say that the FORMOTION® technology follows the natural movement of sport for a better fit and greater comfort in motion. I can’t say that this was 100% tangible but they certainly felt comfortable and protected the key muscles.

And very unusually, the next day, my muscles were surprisingly fresh – I’m letting the tights take some credit for this!

As well as the t-shirt and tights, adidas also sent us the bright orange seasonal singlet and short sleeve London Marathon short sleeve tee – so we’re covered for all weather conditions!

The adidas Supernova Glide Boost is a high-mileage neutral running shoe that will last the test of time. If you’re after an everyday ‘bouncy’ comfortable pair of runners, then look no further than these!

What’s more, these will look just as comfortable in the gym or down the pub.

What do you think of the adidas Supernova Glide Boost running shoe? Let us know in the comments section below or on our Twitter and Facebook pages.