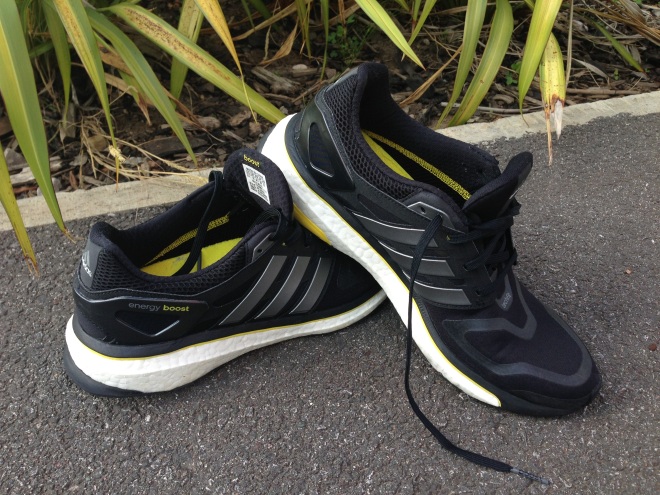 Since the birth of Sport-locker.net and our exclusive play test reviews we have been flooded with a plethora of weird and wonderful performance enhancing claims from a wide range of ‘innovative’ and ‘revolutionary’ products.

While some have been truer to their word than others, in our experience these claims have largely materialised closer to the ‘gimmick’ end of the spectrum after being put to the test with their suggested benefits lost on the amateur participant. 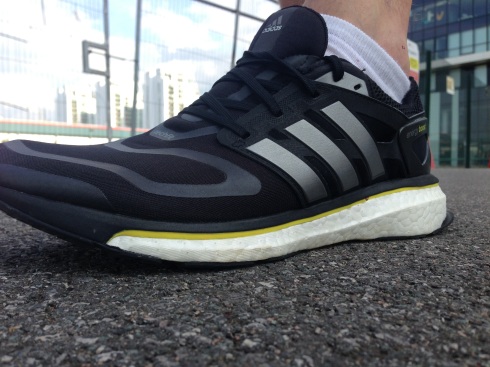 Thus far, according to the various claims by manufacturers, Sport-locker.net should be lighter, quicker, comfier grippier, dryer, cooler in performance and be able to bend a ball like Becks.

Call us ungrateful but we can’t help feeling that there is a quality missing from our performance that, as yet, our reviewed products have been unable to provide or even promise… 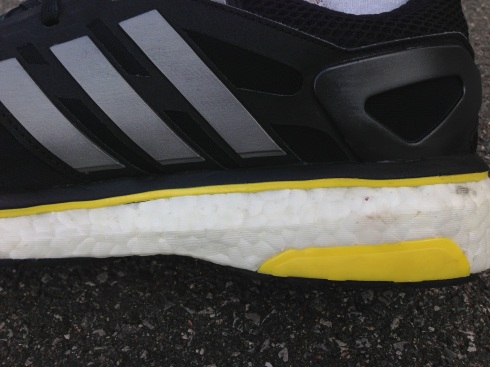 So imagine our unrivalled merriment when adidas unveiled the ‘Energy Boost’.

A ‘revolution’ in footwear cushioning and performance that promises to deliver a return on the energy used with every step making for a more efficient, springier run.

As claims go, this is undoubtedly up there with biggest and boldest and calls for a Sport-locker.net play test review.

On first impression there is certainly something very different about this running shoe. The ‘Energy Boost’ foam sole (more sophisticated details on this to follow) certainly has a distinctive appearance, a vision more likely to be seen inside a cardboard box surrounding and protecting your new television. Yes…polystyrene.

Once we put this visual image behind us, we were struck by the subtlety of the rest of the shoe. A simple black and grey design that would not look out of place in a more social and casual environment paired with… (insert leg wear of choice – shorts in our case, see below). 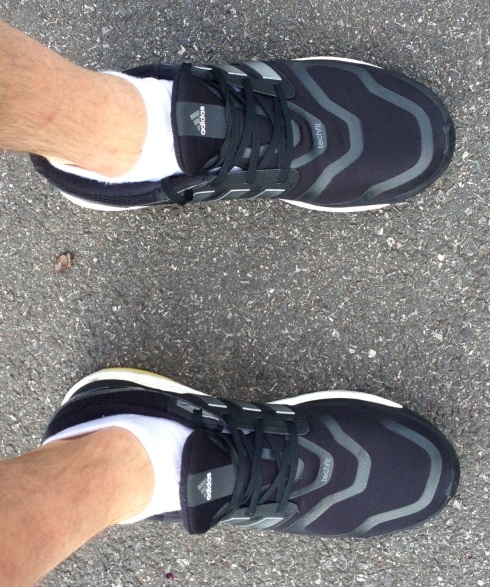 This is part of a more general trend, blurring the lines between training and lifestyle footwear.

With such a modest appearance, the pressure was certainly on the technology features to do all the talking for this shoe.

With the ‘Boost’ there is only one place to start…the polystyrene.

Now that is the last time we refer to it in this way because having put the shoes through their paces, the similarities end.

Who would have thought that fusing polyurethane capsules with high pressure steam would create such unique and pleasant running experience?

Immediately the shoes feel light and springy with the foot sinking into the generous cushioning and there can be no denying that even the initial tentative steps taken had an added spring to them. 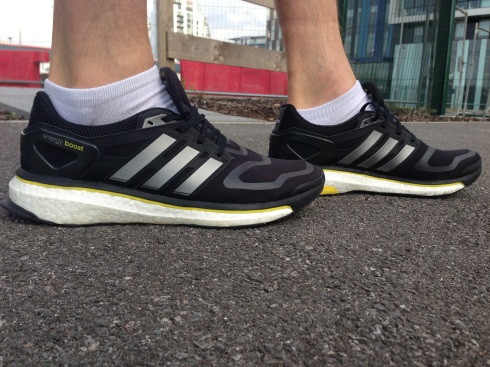 Like good children, we listened to the advice to wear a size up from normal to compensate for the snug fitting you get from the Techfit technology.

While it does make for a snug fit, the material used in and around the toes and front of the foot feels stretchy. A quality not associated with the mesh used on many other running shoes.

Sport-Locker.net’s first outing in the ‘Boosts’ was a post 30km race recovery run and they could not have been more suitable for purpose. 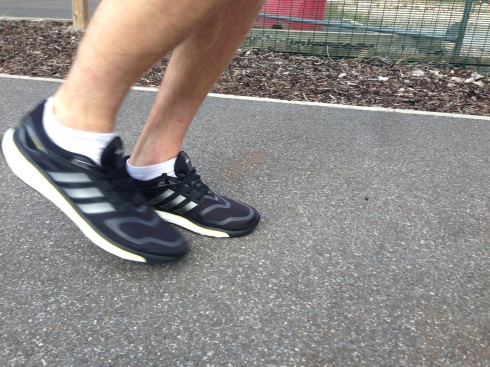 Our tired and weary legs and feet welcomed the ample cushioning and definitely felt the benefits of the ‘Boost’ technology with bouncier steps.

Having raced in a barefoot style up on the balls of the feet, this slower recovery run took on a more heel/midfoot striking style, meeting the target running style of the ‘Boosts’ and the results were very impressive.

There is a definite gentle rolling sensation from heel to forefoot in every step provided by the adidas Torsion system. Another effective technological feature that would particularly appeal to and benefit all you heel strikers out there.

When it came to quicker and more intense sessions, the story is a little different. While the ‘Boosts’ did not hinder performance it was apparent that they are no match for a racing flat.

You don’t get that same spring and bounce when running at speed up on the balls of your feet which is why heel-strikers would certainly benefit most from wearing these.

That is not to say that the ‘Boosts’ did not deliver on comfort at speed during a track session and during an interval session on the treadmill because they did deliver to a very high standard. Perhaps not when the heavens are open though because it was very quickly apparent that the Techfit lining is anything but waterproof.

This is not a big issue because no running shoe will comprehensively repel the rain but there are other running shoes out there that are significantly more splash-proof.

Innovative technology that delivers on a bold promise…

On the road, track and the gym, the benefits of the technology can be felt and the ‘Boosts’ are now a very welcome and established part of Sport-locker.net’s training regime. Particularly on recovery and longer, lower tempo runs as well as the odd social excursion.

What do you think of the innovative adidas Energy Boost running shoes? Do you wear them? If so, please leave a comment below or on our Twitter and Facebook pages letting us know what you think of them.