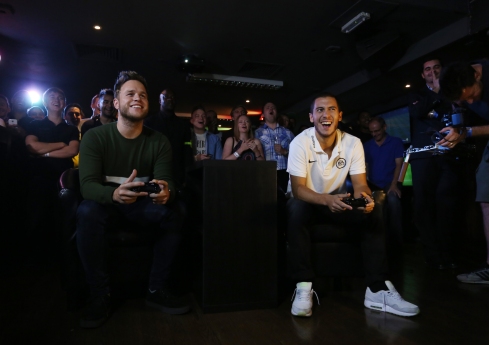 There’s always a huge buzz around the unveiling of a new FIFA game and last night was no different.

Premier League stars including Rio Ferdinand, Wilfried Zaha, Andros Townsend, Harry Kane and Nacer Chadli came to the London event to play the game ahead of its release on Friday September 26th.

And it wasn’t just footballers who were keen to give the latest EA SPORTS title a try: Mark Cavendish, Louis Smith and George Groves were representing the wider sporting world and Olly Murs, Lethal Bizzle, Union J, and the Inbetweeners Blake Harrison were there from the world of entertainment. 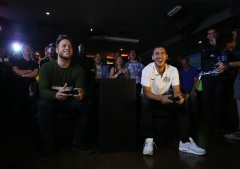 Around 200 FIFA fans were there having won the chance to attend through Sportlobster, and were treated to a series of on stage challenges including FIFA 15 UK pack star Eden Hazard taking on Olly Murs in a tense Chelsea v Manchester United game which ended 0-0 before Eden Hazard won on penalties.

The game was followed by another clash of the titans as the strongest player on FIFA Adebayo Akinfenwa took on newly crowned European Super Middleweight champion George Groves, with Akinfenwa duly dispatching Groves 3-0 on the game.

EA SPORTS FIFA 15, released Friday September 26th on Xbox One, PlayStation 4, and all other formats. Get your copy on #FIFA15Friday from easports.com/uk/fifa/buy

What do you think of FIFA? Will you be buying the new one? Let us know in the comments section below or on our Twitter and Facebook pages.