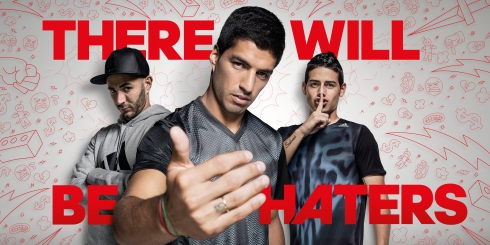 Just as Sport-locker.net was cosying down in our armchair to avoid the winter chill, BOOM!

adidas has gone and lit a spark under the world of football today by launching their #ThereWillBeHaters campaign; focused around a provocative new video featuring global football stars such as Luis Suarez, Gareth Bale, James Rodriguez and Karim Benzema.

If you have “haters”, then it’s the ultimate compliment. The best players know that a great performance delivers “hate” from fans and opponents, particularly on social media, which then continues to fuel the confidence to deliver even greater performances.

They thrive off it – and they make no apology in doing so.

The film, featuring title track “Battle Royale (Haters Instrumental VIP)” by Apashe, has been released to coincide with the launch of adidas’ new football footwear range for 2015.

The adidas  adizero f50, Predator, Nitrocharge and 11Pro all sit at the cutting edge of technology, ensuring you will deliver a “haters” performance when you step out onto the field.

The film, which kicks off with the provocative voiceover of “They hate the way you walk. They hate the way you talk…”, features the larger than life personas of ‘Hero’ Gareth Bale, ‘Golden Boy’ James Rodriguez, ‘Target Man’ Luis Suarez, and ‘Hip Hop VIP’ Karim Benzema.

The video takes a whirlwind tour of the perceived lives of these players, focussing on their flash lifestyles, over exuberant goal celebrations, possessions and good looks.

The film then goes on to illustrate exactly how, why, and what the haters hate about them the most… their outstanding achievements on the field of play and the boots that drive these incredible performances. “They hate your shiny new boots. They hate your boots… because they wish they were in them”.

The world’s most hated players will wear the all-new adidas adizero f50, adidas Predator, adidas Nitrocharge and adidas 11Pro on field from January 23rd, with the boots available to purchase from Monday 2nd February at adidas own-retail outlets as well as specialist retailers worldwide.

What do you think of the new adidas There Will Be Haters Campaign? Let us know in the comments section below or on our Twitter and Facebook pages.