Packed with new innovations and improved technology, this next generation evoPOWER boot generates even more power and accuracy when kicking!!!

Like its predecessor, the new evoPOWER 1.2 FG is inspired from the power generated through a barefoot kick.

The boot’s lightweight and super soft microfiber Adaptlite upper material stretches in a longitudinal not lateral direction allowing a freedom of movement while maintaining support.  Combined with the Gradual Stability Frame (GSF) outsole technology, the foot bends with a kinetic motion similar to a barefoot to help a player create increased power, especially when shooting.

Accuracy is further improved with the GripTex print that runs across the full length of the upper. The print enhances the grip of the ball in both wet and dry conditions, giving players increased control.

Added precision is created through the lightweight AccuFoam lining that combines with the upper material to provide a clean kicking surface, which helps to increase accuracy when passing and shooting using different areas of the boot.

Speaking about the new evoPOWER 1.2 FG boot, Cesc Fàbregas said: “Accuracy is the basis of my game, it’s very important for a midfield player both when I pass and shoot.  I love the improvements that have been made to the evoPOWER boot that have an increased focus on accuracy as well as power.  Football can be won and lost in small margins, having a boot you believe will help you perform at your best gives you a confidence to perform at your best.  I am very happy with what PUMA has done with this boot. “ 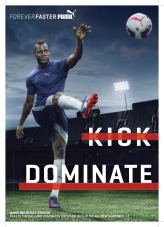 Mario Balotelli also commented: “The new evoPOWER boots are really impressive.  I’ve been testing them for a few a while in training and PUMA has made an already very good boot even better.  I can feel the power evoPOWER gives me when I shoot, that’s very important for a striker of course.  I’m looking forward to wearing this new boot on pitch.”

Tonight Cesc Fabregas and Mario Balotelli will both wear the boots as they go head to head in the Capital One Cup.  To celebrate, PUMA’s Thierry Henry puts Fabregas and Balotelli through their paces to see whether power or accuracy comes out on top:

The new evoPOWER 1.2 FG boot will be available globally in-store from 2nd February 2015. A full colour aligned collection including training apparel and accessories, shin pads and balls will also be available to purchase.

What do you think of the new PUMA evoPOWER 1.2? Let us know in the comments section below or on our Twitter and Facebook pages.