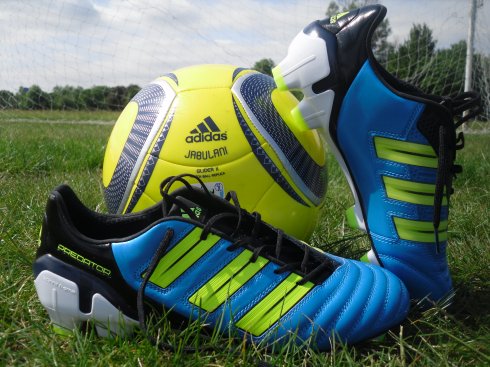 With the football season now over, it will soon be time to think about what to do this summer.

A horrible concept, granted, but here at SportLocker we may have the answer to ensure your break from football is not all heart-breaking.

Because when the time comes to choosing what new football boots to buy for next season, we could well have the answer. Look no further than the adidas adiPower Predator – the 11thgeneration of the most iconic football boots!

And after attending the amazing launch of the newest Predators, Sam Van Gelder got his hands on a pair to try out – a full month before release date!

Here is how they fared:

We normally start with the technology talk first. And we will do this time, but this is basically the adipower in a nutshell:

And after all that info, I forgive you if you don’t feel the need to read on any more! But if you want to see how they performed on the green stuff, then please do stick with it…

This is because adidas tends to set new and improved standards with each release – and it doesn’t look like they have disappointed with the adiPower!

The latest concept is to create a visionary football boot to answer the demands of modern footballer.

“There is a new kind of player that requires a new kind of Predator boot. These are young, confident and have the skill and ability to shape games as they please.

“With the all-new adipower Predator featuring technologies like Sprint Frame, Powerspine and a refined Predator element, the game is theirs to own.”

So it seems that the reduced weight of the boot is the key here – heightening my excitement to put them through their paces!

Not in a long time have I been so excited to get my hands on a pair of football boots. There is just something magical about a Predator boot.

Visually, they are stunning.

Adidas have talked a lot about the adiPower signalling a new era for the Predator. The fact that this is the first time that the launch colourway is not the symbolic black, white and red speaks volumes – they really want to send out a message that the iconic boot is changing big time.

And there are many similarities to the f50 adiZero, a boot that sent shockwaves through the footballing world when it was released last year.

What’s immediately apparent is just how light the boot is – it just doesn’t feel like a Predator. It almost looks like a powerful combination of an adiZero and adiPURE, which sounds like the ultimate boot to me!

The stitching is much more noticeable than ever before, and is designed to offer both good ball feel and flexible movement, much like the adiPURE.

As I was about to put them on my feet, I felt the same sense of excitement as I did when putting on the adiZeros for the first time.

And it’s a great feeling! They are so much lighter than any previous Predator. To think that they are only 20g heavier than Nike’s Mercurial Vapor SuperFly III is astonishing.

They look and feel completely different to the preceding incarnation, the Predator X, and fit very much like a control boot – something that adidas were hoping to achieve.

The tongue has changed from the wraparound feel to the Predator X, to a more traditional (and comfortable) looking one.

The hexagonal inlay on the heel lining looks like it could be a great addition, as it offers superb comfort similar to the inlay of the CTR360 Maestri II.

Another observation was the sizing. I usually wear a UK9, but these were an 8.5 and they fit really well. The Taurus leather should stretch so these were just about perfect. However, if you have wide feet, stick with your usual size. 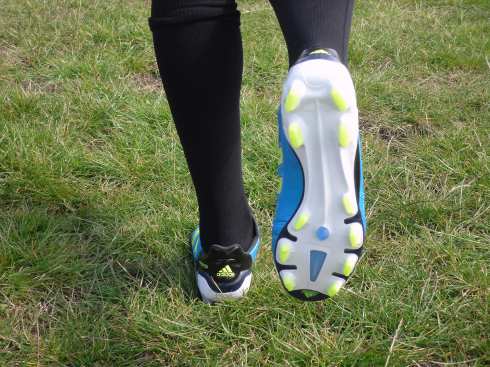 The comfort continued as I began to run in the new Preds. The flex groves in the Powerspine make for a nice run as the element is kept highly flexible in the right direction.

And because it has the same last as the adizero (the fore-foot and heel are wider), it means that the studs can be placed closer to the outside of the sole. This improves the stability, movement, traction and pressure distribution.

However, I can’t say that the sense of traction is as tangible as the Nike SENSE studs on the SuperFly, but I still felt very confident when moving and making last-ditch changes of direction.

I wasn’t the biggest fan of this, as I’d always opt for a K-Leather but for some reason, these feel suppler and less rigid.

This type of leather is supposed to have high scuff qualities yet still perform well in terms of touch, and I was really enjoying having the ball at my feet in these boots.

Adidas claim that “The Predator element”  has been re-engineered to maximise ball control abilities, with the use of an injected silicon-rubber component on the medial side of the boot.

However, when passing the ball, I couldn’t say they were as noticeable as the passing pads on the CTR360 Maestri IIs.

Instead, the Predator element definitely comes into its own during shooting!

But the decreased weight definitely makes you feel like you want to be on the ball the whole time, and gives you the confidence to dictate play with plenty of passes. They definitely offer a better feel for the ball than previous Predators.

With the massive reduction in weight, I was slightly worried that this would lead to lack of power when it came to shooting.

Further to that, the placement of the Predator element (the things that make the ball swerve, apparently) seems to be getting further and further back. Whatever happened to having the grooves around the toe area?

But as always, the Preds never let me down!

The grooves on the stripes certainly offer a more aggressive contact than the dimples on the Predator X, and make for a great purchase when striking the ball.

The hexagonal pods provide a longer contact time with the ball, which should lead to greater swerve. It does take some time perfecting the technique to achieve great results, but once mastered, your shots will be dipping and swerving all over the place (but hopefully into the top corner).

Adidas have stuck with the much maligned Powerspine technology (many of the pros changed this element on their Predator Xs) which supposedly minimises energy loss when striking a football.

It’s hard to tangibly feel this in a playtest, so I would need to play a few more games in them to properly feel the benefits. But a true, clean strike can be felt nonetheless.

Just like the adizero, the new adiPower predator has shaken the football boot world – especially in terms of the pros.

World stars like Kaka, Jack Rodwell and Nani have all left the adidas adiPURE and adizero respectively to don the new adiPowers – a testament to just how good the new Predators are.

For midfield maestros and speedy/tricky wingers to move to a Predator would have been unheard of before these were released – so they really are groundbreaking.

Robin Van Persie, an avid wearer of Predators throughout his career, said of the new boot: “The new adiPower Predator is perfect for controlling the ball. If you have a good first touch and good ball control then you are able to own the game.”

They really do tick all the boxes!

And the other box that needs to be ticked is the price. At £155, they seem to be fairly priced. If you look at comparable power or control boots, they roughly cost the same.

And if adidas choose not to bring out an SL version (like they did with the adiPURES), and these are indeed the top level release, then they look a snip – the Elite versions of the Laser/CTR360 II would set you back £250/£225 respectively!

So all in all, a superb addition to the adidas family.

What a season for adidas!

First the adizero, and now the adiPower – it just doesn’t get much better!

I was a fan of the previous Predator incarnation, the Predator X, but these are on a whole new level.

Comfortable, powerful, and most significantly, lightweight, these adiPowers could really spell a new dawn for the most famous boot ever created.

Dare I say, the best adidas Predator since the Accelerator in 1998? Truly stunning, and a boot that we will still be talking about in years to come.