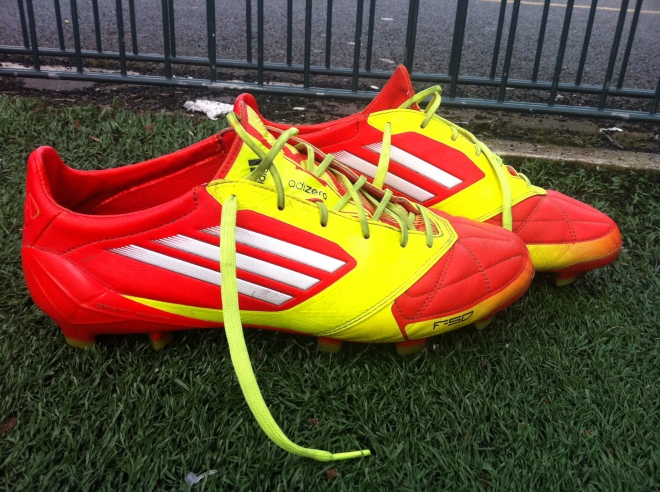 It’s safe to say that the Nike Mercurial Vapor VIII has been the football boot grabbing all the headlines in recent weeks.

But there’s another speed boot that is topping all the goalscoring charts in leagues across the world – and one that Sport-locker.net have been eagerly waiting to review.

The adidas F50 adiZero miCoach was the most anticipated release at the start of the season and has gone on to be a huge success throughout the campaign.

And ever since they landed at Sport-locker.net towers earlier in the year – we’ve been putting them to the test.

By ‘we’ve’ we obviously mean our serial football boot reviewer Sam Van Gelder – and here is what he thought of the ‘boot with a brain’. 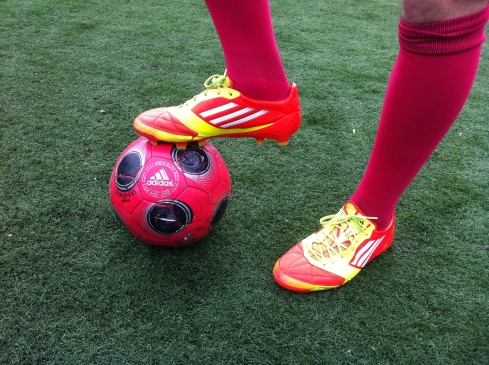 I’ve waxed lyrical about the first incarnation of the adizero (both synthetic and leather) in previous reviews – it truly was a groundbreaking football boot for adidas ahead of the 2010 World Cup in South Africa.

In my opinion, adidas are finally in pole position when it comes to speed football boots.

Since the release of the adizero miCoach, I’ve literally been counting down the days until I could get my hands on a pair

The addition of the miCoach technology, which enables you to analyse your personal speed, distance and work rate during a game, will surely make these be yet another hugely innovative and revolutionary football boot from adidas.

The fact that they are also at the top of our Premier League Fantasy football boots in terms of both goals and assists must mean they are pretty special.

It never ceases to amaze me when taking a pair of adizeros out of the box just how light they are – they’re gravity defining!

For a leather pair of boots to be this light is just incredible.

One of the first areas that I noticed on the adizero miCoach was the leather coverage. The Galeo full-grain leather no longer covers the entire forefoot through to midfoot, but instead it now covers just the front of the boot.

I must admit I’m not a huge fan of the High Energy / Electricity lead colourway. Unless you play for Watford or a McDonald’s XI, they will always look a little garish!

So on first impression it only looks as if a few minor adjustments have been made in terms of design. But if it’s not broke, then why fix it?!

What’s immediately apparent when putting the adizero miCoach on your feet is the suede like feel inside the boot, which make them extremely comfortable.

It was also noticeable just how much the boots wrapped around your foot once the laces are tied. The fit in the midfoot area is amazing, and the lockdown feel on your foot is extremely tangible.

What’s more, there’s a little bit more room in the toe box area which heightens the sense of comfort.

There’s a slight change in the studs from the initial release and this is very much for the better.

The traction they offer is superb, and you can feel comfortable when changing direction at speed and short notice.

As mentioned above, the lockdown feel is awesome in the adizero miCoach, and very similar to the A-frame cradle featured on the Umbro GT (but better!)

The SpeedCell sits in a cavity in the left boot. For some reason, as the photo above shows, there is the same compartment on the right boot’s outsole, but there’s nowhere to put the SpeedCell! I’m guessing this is simply to maintain the balance of the boot.

Another pro for the leather upper is that there’s no creasing – something which really annoys me with synthetic uppers.

Keeping with the synthetic v leather debate, the fact that the adizero miCoach is so light, you immediately think that only pacy wingers or strikers should wear them.

Two words: David Silva. The fact that someone of his technical ability wears the leather adizero miCoach over say a Predator or adiPure is a huge compliment to the boot and also shows just how good it is! 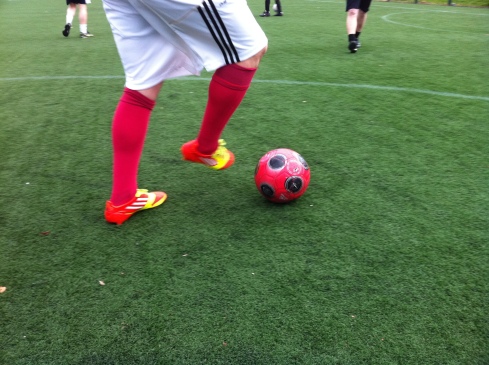 The leather upper offers superb touch and feel for the ball, yet still you get a really lightweight feel – the perfect combination for the modern game.

Their certainly not just for speed merchants – you can feel totally comfortable on the ball in these.

What’s more, the fact that they offer both a synthetic and leather option is a further kudos to the boot and something which the Nike Mercurial Vapor could take note from!

This is where the boot comes into its own.

Firstly, the Sprintframe outsole uses geometrics and new stud construction to offer the perfect balance between lightweight and stability. 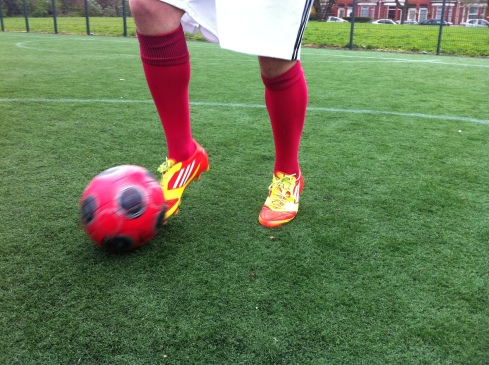 You feel on your toes at all time in these boots but never at the expense for a sense of flimsiness.

We’ll go into more detail about the technology involved in the adizero miCoach further on, but it’s fair to say that these were built for speed.

The ability to track and record your data (such as speed, distance, number of sprints and intensity work levels) from matches and training is honestly the most amazing thing I’ve ever witnessed in a football boot.

It’s amazing to see what mental affect this has on your game. The fact that you know your stats are being recorded, it makes you want to run that bit faster and further for the cause!

The adidas adizero miCoach is the ultimate definition of a speed boot! 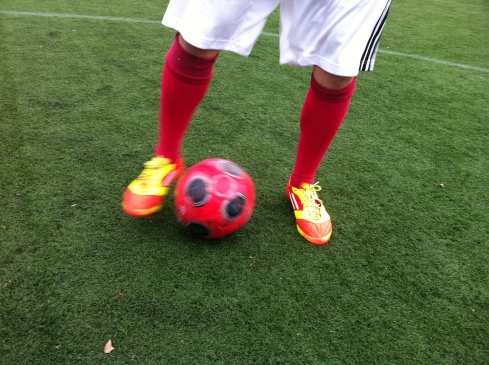 Having tested plenty of football boots now, I think the benchmark for passing has to be the Nike Maestri CTR360 II.

The adizero miCoach isn’t quite up to that level yet, but then again it’s not supposed to be. (Wait for the adidas Predator LZ (Lethal Zones) people!)

It is however, definitely the best ‘passer’ of all the speed boots I’ve tested which include the Nike Mercurial Vapor, Pele Sports Trinity 3E and Umbro GT).

This has to be down to the leather upper, which reacts extremely well when trying to manipulate passes in tight areas.

This was the area in which I was surprised at just how much the adizero miCoach excelled in.

The slightly off-centre lacing makes for a larger striking area and this design feature really does come up trumps when striking a ball at goal.

Although the synthetic adizero offers a little more ‘ping’ to a shot, there’s something about the design of the boot that makes for quality connections.

Even in the leathers, the ball stays hit and I can’t put my finger on why!

As with all speed boots, due to the lightweight nature, this area is never going to score incredibly highly.

That said if you get caught hard with a studs up challenge, it will still hurt whether you’re wearing a rugged pair of sturdy leather or thin speedsters.

Although these leather adizeros are certainly better equipped for challenges than the synthetic version – it doesn’t feel as if your foot is so close to the upper.

As always, a boot is never perfect.

My only slight aggravation with these is that after a couple of months of wear, the area between the toe area on the upper and soleplate scuffs quite badly, as this video shows:

However, this is probably due to the fact that I train on a 3G surface and probably wouldn’t have happened had I just played with them on grass.

Keeping the yellow laces the same colour as when you first get them is impossible, but the general maintenance of the boot is fairly decent.

Nothing a magic damp cloth can’t sort out!

I could write a thousand word article on: “How miCoach technology changed football boots forever!” But I won’t. That would be very boring of me.

I cannot emphasise enough just how groundbreaking this technology is.

This review should focus solely on the adizero boot itself, but because this is the first boot to incorporate the miCoach technology it’s just too difficult to ignore!

Having the ability to track your performance is an amazing selling point for this boot and one that makes it stand out from the rest.

Despite needing an IT tech brain to set up the miCoach on my computer, once installed it is really easy to use. As this screengrab shows, you can download your data to the miCoach.com online training hub to see graphical representations of your performance.

It’s also a nice touch than you can compare stats with other footballers, including pros. I’m only a couple of km/h slower than Lionel Messi!

Put simply, the adidas f50 adizero miCoach has now set the standard for other speed boots to follow.

A superbly comfortable yet lightweight package is made even better by the ground-breaking miCoach technology incorporated within it.

The f50 series was once firmly in the shadow of its biggest rival, the Nike Mercurial Vapor.

But now it’s leading the way and is winning the race with ease, and I’m not sure anyone can catch up…

What do you think of the adidas f50 adizero miCoach? Is it the number one speed boot now thanks to the miCoach technology? Let us know via the comments section below or on our Twitter and Facebook pages.