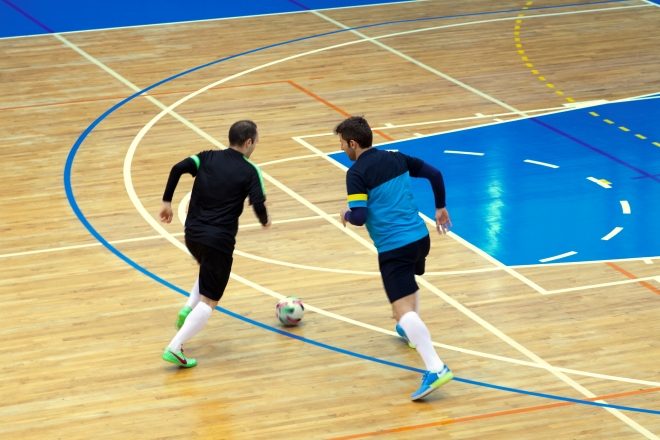 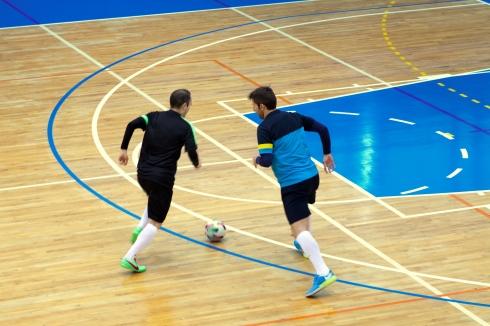 If you’re anything like us (football mad) then that probably left you desperate for more. More Iniesta, more futsal, more more more.

Well, there is good news.

Allow us to present a revealing and intriguing interview with Iniesta  alongside FCB Alusport Futsal player and co-star Jordi Torras. 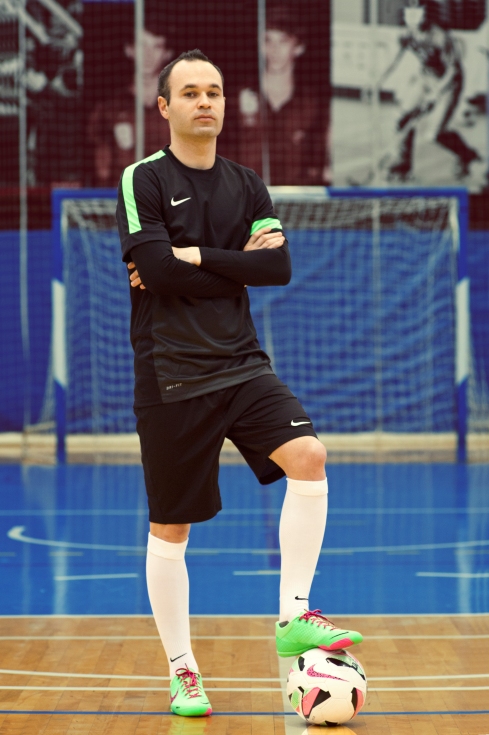 The two men are among the shining lights in their respective sports and were only too happy to talk all things football, futsal and their love for the beautiful game.

Both of you have won many trophies in your careers. What motivates you to keep pushing to achieve success?

Jordi: Personally, I maintain that ambition because I do something that I like. I think it’s fundamental to have that ambition even though you’ve won many trophies or even won everything you can. For me it’s crucial.

Andrés: As Jordi says, challenging yourself is fundamental, as is the desire to win and to keep improving. Obviously, nobody likes to lose. We all like playing well and being recognized for what we achieve. 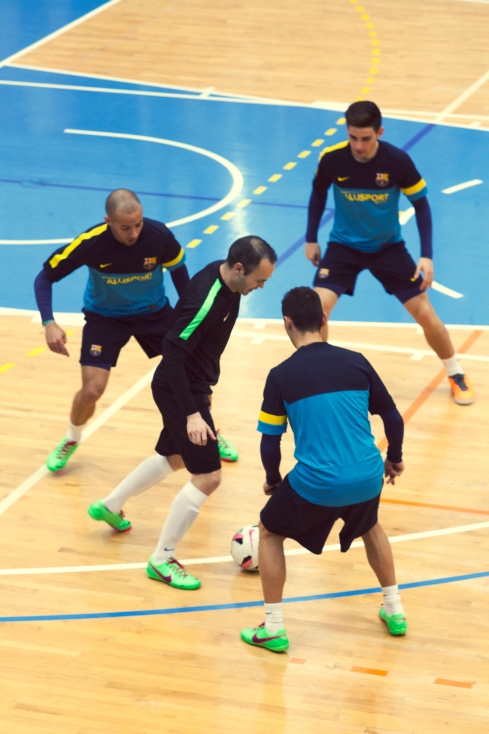 What are the similarities between futsal and 11-a-side football?

Andrés: I love futsal. I personally enjoy it a lot. As a professional footballer, perhaps the tactical elements and movement in the game gets lost on you. But what I love is their skill with the ball, the intensity of the moves, the side steps, the blocks, the passing. Watching it is a real pleasure. I take my hat off to futsal players because it’s extremely difficult. Watching it on TV is different to when you train or play it for real.

Jordi, what aspect of Andrés Iniesta’s game would you like to have?

Jordi: He never loses the ball. It honestly looks like he’s dancing with the ball, that he’s always in control of it although he’s surrounded by four or five opponents. I love watching him do that.

And you, Andrés, what aspect of Jordi’s game do you admire?

Andrés: For me his ability on the ball is key. As a midfielder who likes to be in possession, controlling the ball will always be crucial. Looking at him and his team-mates making split-second decisions on the ball, when they bring it under control — I love it when Jordi has the ball.

When you’re young and in your hometown and the only thing available is a school playground to play futsal — well, I’ve always said that today Andrés Iniesta is a footballer, but I grew up playing futsal on the playground, which I believe has a lot to do with many of the things that I can do today.

If you had to choose one moment in your careers that is most special to you, what would it be?

Andrés: For me it was the day I made my debut in the Barcelona first team. When I was young I never thought about achieving so much; my goal was to become a La Liga player. It was a dream that I spent years pursuing at la Masia.

Jordi: I see where I am now as success, the day-to-day, that for me is the main achievement, apart from all the trophies I have won. Enjoying these moments, the important games for your club and the national squad — for me, these moments, the feeling of a must-win game, that is something unique and incredible. I think that only the players on the pitch can experience that. 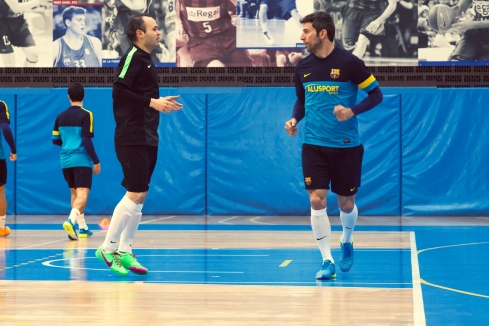 Both of you grew up in la Masia. What is it about la Masia that makes it so special?

Andrés: I think that what makes it special is that you grow up at home. It’s a special feeling. When you make it to the first team after so many years, after pursuing a dream that becomes closer to reality on a daily basis, after working so hard — when you feel part of something, when you really feel it, it makes it yours. I believe that this is the essence, the secret of those who grow up in La Masia, we have an added bonus that makes it different.

Jordi: My experience at La Masia is totally different to that of Andrés. He has always been part of the Barcelona set-up, from the Academy to the first team. I was in the Academy and was moulded there. But futsal was non-professional and very different than what it is now. I knew that staying in Barcelona at that time wasn’t the best for me. And I had to make a difficult decision to try something new as each person has to find their own way in order to grow. When they asked me to return three years ago I didn’t think twice. It’s great to be here at home, as captain of the team, lifting trophies up and watching how futsal has grown considerably.

Andrés: When I started, or when I played futsal, I didn’t think about becoming a footballer. I played futsal just like many of my friends. We spent hours on the school playground. It was an education that I’ve carried with me all these years. As I said before, my game today is what it was when I was 8 to 10 years old. I’ve obviously improved through having to compete and be better, and also thanks to the support and coaching I have received from the best professionals. But, without a doubt, what I was when I was younger is what I continue to be today.

Do you still play futsal or is it consigned to the past?

Andrés: No, because of my job, I rest in the spare time that I have because our schedules are very tight. But I still watch and follow it. It’s a sport that I like a lot. 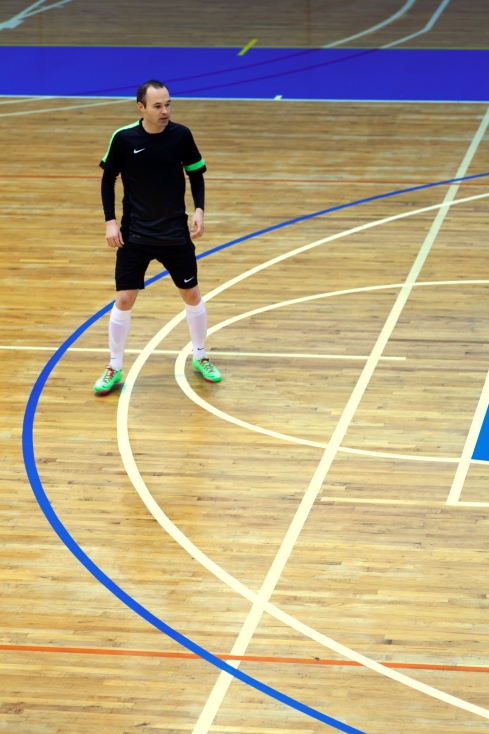 You have tried the new Nike Elastico Finale II (when filming the “My Ground’ video for Nike Football) – how did they feel?

Andrés: They’re fantastic, considering I played on a surface I don’t usually play on with a ball I don’t play with. They were extremely comfortable and I felt great wearing them. In my opinion, comfort is fundamental in football and in the Elastico shoe.

Jordi you wore the new Nike Lunar Gato II during the shoot. What were they like?

Jordi: These shoes are great for me. After one training session with the Gatos, they already feel perfect. The sole has changed — it’s much more flexible. This is key on this surface. The feel you have for the ball and the court is great especially when turning on the ball. The leather is also much softer, it feels like a sock.

Finally, what was it like to film “Andrés Iniesta: My Ground” together?

Andrés: It was great experience to spend some time with the professional futsal players and I had a fantastic time.

Jordi: For us to have a player of the calibre of Andrés Iniesta on our court really helps us to improve. Futsal is a sport that is on the up and gaining more and more recognition, especially here in Barcelona, and to work with Andrés was a pleasure.

Have you played the game futsal? What do you think of the Nike Football FC247 Collection? Do you think Iniesta’s futsal skills will help Barcelona lift the Champions League trophy this year? Let us know in the comments section below or on our Twitter and Facebook pages.

One thought on “Sport-locker.net interviews Andres Iniesta and Jordi Torras”